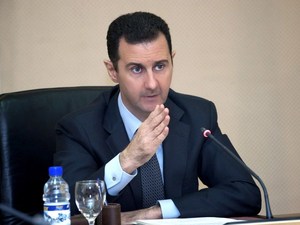 Quitting power while his government battles a countrywide uprising would be a "national betrayal," Syria's President Bashar Assad has told a German newspaper in an interview.

"If I decided to leave office under these circumstances, it would be national betrayal. But it's another question if that's what the people want," he told Frankfurter Allgemeine Zeitung.

"Elections or a referendum are the way to know if the people want you to quit your post," said Assad.

His remarks were published in full on state news agency SANA a day after the German daily published extracts from the interview.

Assad's departure has been a key demand since the early days of the uprising that began in March 2011 with peaceful demonstrations, before devolving into a brutal armed conflict.

The violence has killed more than 93,000 people, according to the United Nations, but Assad has repeatedly insisted he will not step down and will be in office at least until the 2014 presidential election.

"The presidential mandate finishes in 2014. (We're) in a time of crisis... and it is normal not to leave the country," Assad said.

The Syrian regime has pushed back hard against rebel gains in recent months, with its Lebanese ally Hizbullah dispatching members to help the army regain territory.

The Lebanese group was most publicly involved with the army's recapture of the onetime rebel stronghold of Qusayr in central Homs province earlier this month.

But Assad insisted that only a few hundred Hizbullah fighters were in Syria and downplayed their role in the fighting.

"There aren't (Hizbullah) battalions. They sent a certain number of fighters to the border area in Qusayr, there they found the terrorists," he said.

"They helped the Syrian army to cleanse the area," he added.

Hizbullah's chief Hassan Nasrallah has acknowledged that the group is fighting alongside Syrian troops against the uprising.

Last week, he said Hizbullah fighters would remain involved with the conflict even after the recapture of Qusayr.

Elections will be on what form of execution should be performed on this animal.
I vote for skinning him alive then halting him up. I know how much the shabiha love using salt in torture.

Oh gosh! now really ?! ure 5% followers believe you but do u really think that the rest are stupid too? dictators era is gona u are here by mistake and history will correct it!