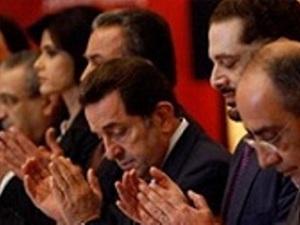 Meetings held between top March 14 officials and former Premier Saad Hariri in Paris were aimed at finding ways to confront the new cabinet “after the constitutional coup entered its second stage,” said a high-ranking official in the coalition on Tuesday.

The March 14 forces had said that the collapse of Hariri’s cabinet in January was the result of a coup staged by Hizbullah and its allies. In remarks to al-Liwaa newspaper, the official considered the formation of Prime Minister Najib Miqati’s government as the second stage of the coup.

On Monday, Phalange party leader Amin Gemayel held talks with Hariri, who had met with MP Sami Gemayel the day before, An Nahar daily said.

The March 14 official told al-Liwaa that the meetings are aimed at discussing how to confront possible sanctions against Miqati’s cabinet that could spillover to other Lebanese officials.

The conferees also discussed the opposition’s platform in the next stage and ways to meet head-on with the government. One of the options would be the formation of a shadow cabinet, the official said.

Al-Mustaqbal bloc MP Jean Oghassabian confirmed to al-Jadeed TV on Tuesday that efforts are underway to form a shadow cabinet.

Saad Hariri is playing safe and smart. In 2006 Gebran Tueni was provoked by Suleiman Frangie and Wiam Wahhab to return to Lebanon as his assassination plot was being prepared. Aoun complicit game in provoking Saad will not work this time. The Hizbollahfication of Lebanon insititutions has started with Iran's Basij, Syria's Berri, Assad's Marada, Aoun Khadaffi, Don Quixote Bassil and all their political mafia of unbalanced and vengeful politicians. Let's hope Lebanon survive this pack of wolves until the tyrants in Damascus and Tehran are deposed so we can regain independence again, bring to justice those who sold Lebanon’s sovereignty, and clean our cabinet from the Basij, Useful Idiots and political garbage. Anyway when Assad is deposed all his Lebanese complicit in crime will be known and justice will be served.

What coup?! Mikati and Safadi where they get the votes during the last election?

they didnt need to call it a coup they called him and threatend him and he came back, this is how it works dude with hezballa

Should the Mikati government take on the characteristics of the government in Syria or in Iran, then M14 will be in the same position as the Opposition in Syria and the Green Movement in Iran -- outlawed and subject to being shot in the steet by snipers from roof tops.

The slide of Lebanon into Hezbollistan has been relentless. M14 should be strategizing about how to keep enough political oxygen in the Lebanese system so as to allow them the opportunity to make a come back in 2013.

It's impossible to take March 14 seriously when they do not know what the term 'coup' means!

STL is the most important thing ever happened in the recent history not only for lebanon but also for the entire arab and islamic world.a heinous crime happened followed by savaged assasinations of political leaders and we want to know who the criminals are and we want them to pay the price. Kissing beards and sweeping murders under the rug in the old Mid Eastern way are gone forever,

What are they doing ! praying at the Mosque ? Saad suceeded to drag them till al amine Mosque to pray al fatiha for the memory of his father Rafik .... !!!

those poor aounists seem to have forgotten when syria was in power in lebanon and they were arrested and tortured and sent to syria! when syria stole the lebanese economy which aoun always claimed!!!!!

they seem to want that period back by praising hizbolla their little servant here and backing the regime of assad which they both called terrorists before!!!!

tell us aounists: have you forgotten that you were beaten and imprisonned by your new allies before? or do persian dollars make you forget everything???

what has changed? the hizb has become democratic and never aimed at lebanese with their weapons? syria has become a land a freedom and prosperity suddenly???
pls tell us if you have the guts....

Stay there until Syria colapsses. Then the filthy non-Islamic militia will dissolve

All what they did the last 5 years is stl stl stl stl. On the news and in the papers all about the stl. Not even once the gov gathered to solve lebanese problems and sign in on new laws. There are stacks and stacks of hung old files and laws that needs to be abolished like the rental law. The poor owners of old rent building are starving while the tenents are living free. Thats one subjuct out of hundred. and so on and so on. Nothing was done during their reign.
billions of dollars vanished and no one knows what they did with them.
The world is astonished how the lebanese people are able to survive.
If syria falls these people are going to come back with vengence. May God save lebanon.

Looking at the picture, I wonder who are they bowing to. Was Feltman there?

They were looking down because what was going on in front of them was a disgusting scene: they had a big wall to wall mirror facing them.