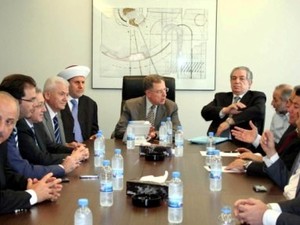 Tripoli Mufti Sheikh Malek al-Shaar has hoped for the announcement of a leadership council over the weekend to contain any incident that could erupt in the northern city.

In remarks to al-Liwaa daily published Tuesday, al-Shaar said that a committee was formed on Monday after a meeting held between al-Mustaqbal bloc leader Fouad Saniora and Tripoli MPs and officials.

The committee, which includes MPs Mohammed Kabbara, Robert Fadel, Badr Wannous, Samer Saadeh and al-Shaar, is tasked with holding talks with President Michel Suleiman, PM Najib Miqati and Ministers Ahmed and Faisal Karami and Mohammed al-Safadi to suggest plans on how to make Tripoli an arms-free city as a first step towards disarming all Lebanon.

Al-Shaar told al-Liwaa that the committee will meet with the officials this week in the hopes that the contacts would lead to the announcement of a leadership council for the north from the Dar al-Fatwa of Tripoli on Friday or Saturday.

The Mufti announced his support for making Tripoli an arms-free city. He stressed that ties with the Alawite residents of Jabal Mohsen and Sunnis in Bab al-Tabbaneh would not be cut.

The latest deadly clashes between the two sides were caused by “foreign hands,” he said in reference to Syria. “We are seeking through cooperation with Miqati and security agencies to contain any danger to shove the city into a new problem.”