Miqati to Diplomats: Commitment to STL Should be Coupled with Preservation of Civil Peace 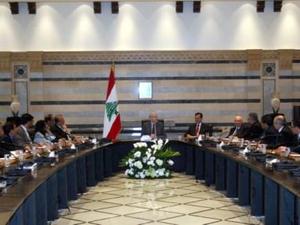 Prime Minister Najib Miqati has stressed to foreign diplomats that Lebanon would remain committed to international resolutions including the Special Tribunal for Lebanon.

During separate meetings he held with Arab and Asian ambassadors, and U.S. Ambassador Maura Connelly on Monday, Miqati said that Lebanon is committed to the tribunal that will try ex-Premier Rafik Hariri’s suspected assassins.

An Nahar daily quoted diplomatic sources as saying on Tuesday that Miqati told the diplomats that the “commitment to the STL is coupled with preservation of Lebanon’s security privacy and civil peace.”

The government’s policy statement would be based on these principles, the premier said.

An Nahar quoted sources as saying that Miqati also stressed to the ambassadors that his government would not challenge anyone in Lebanon or abroad.

While addressing the Arab ambassadors, Miqati said that Lebanon should maintain the best relations with all friendly states.

Referring to the STL and Security Council resolutions, he said: “I have repeatedly said that Lebanon is one of the founders of the U.N. and it respects its resolutions, particularly resolution 1701.”

Furthermore, he urged the diplomats to encourage their citizens to visit Lebanon during the summer season. “Don’t worry about the political bickering. It has become part of our political culture.”

crimes cannot be covered by any "civil peace",it's called coartion.

Well, let me tell you this. The basis of all civil peace, security and privacy is an unwaivering, unconditional commitment to the judicial process committed to seeking the truth and doing justice where crimes have been committed, regardless of the identity of the party charged. If Lebanon gives in to blackmail perpetrated by those expected to be charged in the STL indictments, then there can be no civil peace, no security and no privacy because one party would have put itself above the law.

Mr. mowatan, yes, of course I am not from Lebanon. Everyone who reads my posts knows that. Civil peace, however, is based on the same thing, whether it is in the US, France, Lebanon or Iran. It is based on justice and on wrongdoers being made to account for their wrongdoing in an open, free, fair and independent judicial environment.

The STL, for all of its faults is many times better than a judicial environment that could have been created in Lebanon where politics infuses all state institutions, especially the judicial institutions where party leaders control ministries. The STL is following standard international judicial standards. Now that may seem alien to people in Lebanon because there is no law in Lebanon that cannot be undermined with enough influence or money. But there is integrity in the international institutions, though not perfect, good enough to perform the mission to which it has been assigned.

With all due respect, civil peace is more important than any man. Also the life of any Lebanese that might get killed in any civil disturbance is equally important to the life of anyone. If you don't believe me, ask their mothers and families.

Yes, civil peace is a very important thing, but civil peace based on what? The conflict is clear. Hezbollah has threatened for the past 6 years to disrupt civil peace in order to stop the creation of the STL, and then to stop the government that supported the STL.
Jumblatt abandoned M14 and its insistence on the STL for the sake of securing "civil peace" by joining with Hezbollah.
"Civil peace" born of intimidation by those would would sacrifice it in order to advance their political agenda, is not civil peace. It is the civil peace that Syria had for the past 40 years, which we see now, is superficial only, while below the surface there is no peace and a severe eruption is inevitable.
Real civil peace comes from governments performing their duties, insuring and guaranteeing the rights of all against whomever would deprive even one person of their life, their liberty or their property without cause.
To think otherwise is to bury one's head in the sand and call it peace.

wait and see mowaten! the hezb YES think it is above the lebanese laws!!!

many facts support this, saying the contrary is pure blindness!
of course the hezb is so afraid of the stl that it will do anythg to prevent their accusations even if it means killng half lebanon!
we are still waitins for their so called evidence which they always fail to show!!! why? because they don t have any! all points to syria and its watchdogs... aoun said it the first! remember? hehehe

all dictatorship don t care about lives of the people so does the hezb.... just watch the killings in syria because the gvt is so afraid to lose all its powers, just like the hezb is afraid to be kicked out of the lebanese political scene....