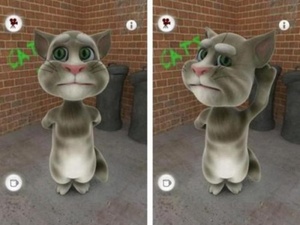 Smartphone character "Talking Tom" has signed with a top Hollywood talent agency in a sign that "apps" are out to break the bonds of mobile gadgets and hit films and television.

"Talking Tom" has become a global sensation since it was launched by startup Outfit7 in Slovenia in July of 2010.

"We see a tremendous opportunity for the company and its characters across multiple entertainment platforms," he continued.

The digital feline was quickly joined by more "Talking Friends" characters that have been downloaded a combined total of more than 135 million times, soaring to mobile gadget popularity.

On Monday, Outfit7 announced that characters "Tom" and "Ben the Dog" are being represented by WME, which has a dazzling client list that includes actress Keira Knightley and pop queen Lady Gaga.

"It's a great validation, not only for our business but more so that apps are becoming a legitimate form of entertainment up there with films, TV, and videogames," Outfit7 chief marketing officer Paul Baldwin told Agence France Presse.

"And in some ways they have become more powerful because you can't carry those other ones around in our pocket, touch them and poke them."

Baldwin's track record includes representing the first digital character to get signed with a talent agency some 20 years ago.

That character was videogame action heroine Lara Croft, who was played by hot star Angelina Jolie in a pair of films.

Baldwin maintained that Hollywood is turning to Smartphone or tablet application themes or characters for movies in the same way it has to comic books and videogames.

Outfit7 pictured Tom and Ben fitting in with a studio such as Pixar, which "took animated films to another level" with blockbuster hits such as "Toy Story" and "Up."

Outfit7 was built around the idea of combining touch and voice-recognizing capabilities of mobile gadgets with casts of characters, the appeal of which has been proven by the blockbuster Harry Potter franchise.

Talking Tom was launched as an animated cat that could be stroked, poked, knocked over, and more using touch-screens. The character also appears to listen to people speak for about a minute, and then repeats it all back.

"People of all ages have this love for cats, and talking is instantaneous," Outfit7 co-founder Andrej Nabergoj told AFP at a recent AppNation conference in San Francisco.

"You put your emotions, voice and story into the character and become a storyteller," he continued. "We had huge success; we never expected that."

Talking Friends echo the language they hear, enchanting people with "instant localization," according to Baldwin, who said the applications have been a hit in China.

The Outfit7 engineering team remains in Slovenia, but the startup has established its headquarters in the Silicon Valley city of Palo Alto.

Versions of "Talking Tom" and his friends have been tailored for Android-powered mobile devices as well as for Apple iPhones and iPad tablet computers.

Five versions of the application are available free, supported by advertising or "micro-transactions" such as buying virtual ice cream for a character.

Versions of the application without advertising are available at 99 cents for Smartphones, and an iPad version is priced at $2.99.