Lebanon Frees All Syrian Refugees Held for Not Having Identity Papers 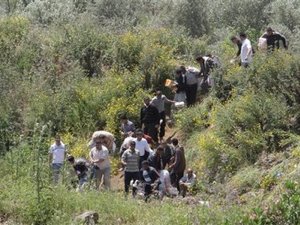 Lebanon's authorities have released all Syrian refugees in Lebanon who had been detained for not having identity papers, activists said on Tuesday.

"Lebanese authorities have now released all Syrians who fled into Lebanon and were later detained for not having identity papers," human rights lawyer Nabil Halabi, who heads the Lebanese Institute for Democracy and Human Rights, told Agence France Presse.

Sheikh Mazen Mohammed, the imam of a mosque in the northern city of Tripoli, said authorities had released 21 Syrians overnight.

"They had been kept in custody as they did not have proper identification when they were found during the time refugees were en masse arriving to north Lebanon," Mohammed told AFP.

Mohammed, an activist who has been helping the refugees settle in north Lebanon, said Prime Minister Najib Miqati had been in regular contact with Lebanese security forces to ensure the refugees were released.

Syrian opposition activists along with at least 5,000 refugees have fled to Lebanon since protests against the rule of President Bashar al-Assad broke out in Syria in March.

More than 1,300 people have been killed and at least 10,000 others detained as Syrian forces crack down on protesters, according to rights groups.

yalla 2 years down the road we will have another refugee problem , and guess qwhaty probably another civil war :p

In 2006 the Syrian people welcomed the Lebanese refugees into their homes. Refugees were treated with the utmost respect and it is time that we take care of them.