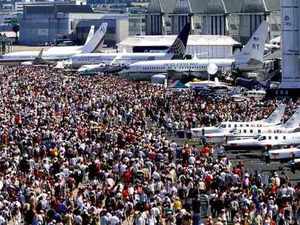 The organizers of the Paris International Air Show were forced to order aerospace companies appearing at the event to shut off devices jamming mobile telephone signals, they told Agence France Presse on Tuesday.

On Sunday, as exhibitors were setting out their stalls at the Le Bourget aerodrome north of Paris, technicians noticed disruptions to GSM frequencies that were scrambling calls, show director general Gilles Fournier said.

Closer investigation by the French state National Frequencies Agency (ANFR) revealed that several of the manufacturers and sales teams operating chalets by the runway on the airport were using telephone jammers.

"Two things are vital for the air show -- the free wifi network at the site and the mobile phone network," Fournier told AFP, explaining he had immediately written to all exhibitors demanding that the devices be turned off.

Legislation on the use of jammers differs around the world, but Fournier's note explained to firms at the site that in France scrambling public networks is a criminal offence and warned he would take action.

"They were all shut off immediately," he said, adding that the ANFR team would continue to monitor the site through the rest of the show and action would be taken if any companies attempted to restart the jammers.

Fournier said he did not know why firms might have wanted to jam signals around their chalets, speculating that they might have regarded it as a security measure to prevent spying on their negotiations or communications.

Telephone communications were still occasionally difficult on parts of the site on Tuesday, but organizers said this appeared to be because of the added drain on the network from thousands of visitors rather than jamming.