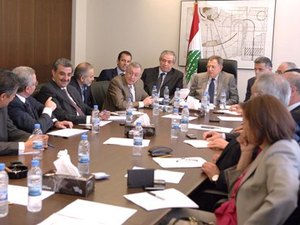 The Mustaqbal bloc condemned on Tuesday the statements of Free Patriotic Movement leader MP Michel Aoun and those of the members of his bloc, saying that they demonstrate “the extent of their spite”.

It said in a statement after its weekly meeting: “They unveil their vengeful intentions aimed at eliminating the other, which is an approach that has been created and perfected by Hizbullah in its political practices.”

“This spiteful approach that Aoun is proud of has cost the Lebanese and those whom he claims to defend massive losses,” it noted.

“It will once again incur dangerous repercussions on Lebanon should he continue with it,” it added.

On former Telecommunications Minister Charbel Nahhas’ statements on Monday that OGERO Telecom General Manager Abdul Monhem Youssef’s “days are numbered”, the Mustaqbal bloc said: “Such statements issued to a general manager who is no longer under Nahhas’ authority and before the completion of the government policy statement are the epitome of spite.”

“We had warned of such practices the minute the new government was revealed,” it said.

“A former minister does not have the right to issue judgments against any employee, especially since he no longer answers to him,” the statement noted.

“We call on President Michel Suleiman and Prime Minister Najib Miqati to take control of the situation seeing as they safeguard the constitution and uphold the law,” it added.

“Former Prime Minister Saad Hariri and the Mustaqbal Movement’s achievements and former Premier Rafik Hariri’s legacy are too deep-rooted in Lebanon to be pulled out by sick minds,” it stressed.

Addressing Friday’s unrest in Tripoli, it condemned the clashes “that are aimed at tarnishing the city’s image and harming its stability.”

It therefore demanded that Tripoli become a weapons-free city, praising the state’s efforts in containing the situation.

One way ticket in or out !! chose ya mustakbal .. Many of you are already out , and many others will definitely go in ... this is a promise from GMA..

GMA & Sayed Hassan , always do what they say , and always say what they do .. so be very careful ..

The tone of Mustaqbal members is showing that they are finally starting to understand that they are no longer in power. After 21 years in power, they are slow to accept that they are OUT, but eventually they will.

bilad el arz is more important than mustaqbal or aoun,any proved corruption from national treasury or any trahison to the country wether financial or patriotic will be punished severely.
but corruption must be proved like stl will prove the crime of our prime minister wether it's hariri or any other, gebran bassil stayed years in telecommunications ministry after marwan hamade, he didn't prove nothing on the contrary he owns now most of rabieh...all our political class are rubbish,sorry to say it.

Call it what you want. The dismantling of Mafia Hariri has begun. Al Mustaqbal must know once and for all that the party and their Party are both over.

bigdigg.... That must be some good stuff you are smoking cause you got your facts all wrong. Prior to 2005, the only ones ruling Lebanon were the Syrian Baath party.

Roxtox... Not at all. Rafiq Hariri took power in 1990. He was all along in partnership with the Syrians in ruling Lebanon. Most the projects that are synonymous with corruption and squandering of public funds were done while he was in charge. Of course, it would be unfair to accuse Hariri alone with all the corruption-- many others took their share. But The Hariri legacy started in 1990 and continued after his death with his son taking over in 2005 and ultimately bringing this legacy to an end in 2011.

I think the stuff you are smoking is better, otherwise your memory would be able to go past 2005.

M14 you have to take aoun with a grain of salt and a lot of pepto bismol. Beware: The guy has no mental filter, a sociopathic Juvinile delinquent, with a postraumatic stress syndrome caused by his exile. Could be contagious. No treatment on the horizon yet.

The government should close in on these crooks when they hold their next meeting. This way, they will net them all in one swoop. Nothing will save them but their fleeing behind Saad, the son of Rafic the Fleecer and biggest Syrian collaborator.

From who throw POISSON not wait that he doenst enjoy looking to everybody dieing by poisson effects, it is natural in him and for that reason wont measure the consequence of his bright idea while he drink and offer his poisson coktail. Who wants to build PROGRESS,, GENERATE WORK, but who enjoy to make suffer to other, choose this action to satisfy his inside, knowing that in his inside that nothing new will happen,

we are already in a very dangerous zone:
mustakbal mvmt and hariri represent more than 70 pct of a certain sect.
aoun represent at least 50 pct of another sect,
are we going to another civil war??? or are we importing syria"s cancer???

bigdigg strange how you forget what aoun has always said... that the syrians were the ones to steal lebanon and obliging lebanese politicians even the most honests ones to participate in this system or they would be killed...
so stop accusing only hariri of the lebanese debt while everyone in power at the time stole including M8 !!!

to le phenicien, i am really suprised how much racism and low iq you guys have, in the midst of all the changes in the world around you and in Syria you are still so blinded to see the dynamics of the future. Come next year Bashar is history and there would be a new ball game where your GMA has to re-adjust politically to survive. This is exactly how your GMA was fired to france back in the day, for failure to properly read the situaiton. You should not be picking fights with the Sunni community at this time, this is the most horrible time to pick fights idiot. The future in the area is for the Arab majority, and the majority are sunnis, why not live in peace and harmony, can you really afford fighting all these people? and what for exactly?? how did your GMA make his millions?? off his military post salary im sure.. dont worry the hizzies are smarter than you and they will have to readjust sooner or later to the new realities, no one is gona fight anyone GROW UP!

Mustaqbal, which is the majority of M14, thought it was more comfortable and they do not have to answer to anything by not being in the government. They thought they will just attack the M8 majority and M8 will be on the defensive. Now with them out of the government, the Lebanese people will see the fraud and back stabbing they have commited for the lat 20 years.

Aoun, we know you are perfect. Just look at your record

aoun and his followers just bark insult vomit at others out of fright and frustration...
they talk about corruption, ok! they are right BUT if they had a sense of state responsability and justice which they have not, they should point their fingers to ALL the politicians who have stolen money not just one party...
but as they just point at hariri it clearly shows that it is out of hatred and jealousy!! otherwise they would include lots of members of m8 in their accusations of theft and corruption!!!!

could they tell us why they don t accuse members of m8 too???
i doubt that they will answer, as they cannot think by themselves...

they should also accuse the hezb of destroying lebanon in 2006 because they acted out on their own when in this country so far the gvt takes decisions of peace and war not a party!!!!