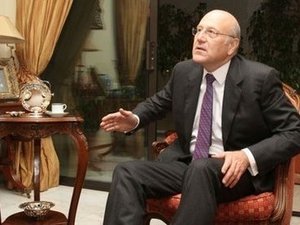 Prime Minister Najib Miqati on Tuesday voiced his surprise over recent remarks by Free Patriotic Movement leader MP Michel Aoun, stressing that “it is unacceptable to cross the limits of courtesy and respect in our political discourse.”

“It is surprising that such remarks were voiced by a responsible man such as General Aoun,” Miqati told reporters after the second meeting of the committee tasked with drafting the Policy Statement of the new government.

“These difficult times require everybody to show awareness and a sense of national responsibility,” he added.

Earlier on Tuesday, Aoun criticized the opposition’s attack on the new government, labeling it as “rude” and stressing that a new cabinet should be granted a 100-day grace period.

“They didn’t appreciate our ‘one way ticket’ joke. A new ward is being prepared for them in Roumieh prison and they will be granted a ‘one way in’ ticket for it,” Aoun said after the weekly meeting of the Change and Reform parliamentary bloc.

And on Friday Aoun said: “We issued (ex-PM Saad) Hariri a ‘one-way ticket’ and he will not return.”

Ya Najib, you should have known how "surprising" all those whom you have formed the cabinet with could be! You ain't seen nothing yet.

Great
Now the Syrians are laughing,
The Tunisians are saying....we told you so
The Jordanian are confirming

with all above the Lebanese politician is fully graduated.

Adding to the diploma:
His relatives
His bank account
His religion
His sect
His potential marriage and to whom

Experience is not a requisite

your allies are dirty and sewer like ; let's not forget to quote also the hand cutting business of Hassan

I really don't understand you people, why does politics have to cover the thoughts of politicians with sugar coating and roses, " we'll kill you , but we'll play it political", " we are going to stab you in the back but we'll say it kindly and in complex political messages", I say the hell with it let everyone say their thoughts out loud , Auon for better or worst at the very least says it out loud and clearly, yet he is labeled a lunatic and a fool! while march 14 sleep every night plotting vengeful acts every second of their days, but no they'll keep it quiet under the hood play the victims until the right moment if they get the chance to strike they WIll strike wholeheartedly! i say no one pass on judgement. the time of sweet talk is over say it out loud and let them know its coming and let every one know whats going down.

anonym: these politicians are followed by their sheep who don t think by themselves... so they are models to them and when they hear a man with no respect whatsoever and calling for revenge and insulting, the sheep just repeat and that leads to hatred and wars...

a politician has to fight ideas not people if he is responsible but attacking his enemies with foul language and dirt in his mouth only shows one thing: his lack of ideas and intelligence and responsaility....

if you want a civilised country begin by civilizing the politicians!

calling for revenge and brainwashing people's mind with simplistic rumors no evdence and just to insult is the typical brandmark of dictators!!!! they look for a scapegoat and tell that he is the one resposible for all the bad thgs! just like aoun with hariri...

see hitler staliine and so many others, just learn from history...
aoun and his allies are just following the old recipes to brainwash their followers...nthg new under the sun!!!!

Dear Mr. Miqati,
Of course, you and I know you were not surprised, but merely trying to continue to play to both sides.
During the next few months you will continue to practice intellectual contortions, acrobatic flips, tight rope walking, double talking and all those fun things politicians do to play on both sides of an issue. The problem is Lebanon will definitely come to a point - very soon - where clear choices have to be made very soon. And you will not be able to hide behind your finger anymore…and this will have consequences with those who supported your election.
And, speaking of consequences, I would say with reasonable certainty that you and Safadi, should forget about winning your next election in Tripoli, unless your allies use their weapons to force you on the city as they did to force Jumblat into submission.

PM Miqati, if you keep getting surprised in this manner, you might get a one-way ticket yourself.

Noun has always been disrespectful towards his adversaries. He think it is a war? It is politic and thebshould be a minimum standard of respect.....

Just wishing our leaders learn how to be like that, only then we can have a healthy debate!

He lost all respect when he betrayed the Lebanese people.

Dear Mr Mikati and PM - Dont start covering your predecessor because heis sunni , he is a thief and should be judged .

What GMA said is the truth , and that's what WE Lebanese would like to hear . If you are not happy , you know what is left for you to do ..

No more hideaways for thieves and corruption . all the files will have to be open , and the jails will be filled with these thieves of al mustakbal .

freedom of speech? that is something for a democratic country.....
he who supports hizbullah's allies cannot ask for freedom of speech....
and he who wants to open all accounts...let him open ALL accounts... not choose a year that is beneficial for them...
This is a new kind of Hypocrisy... Shame on Aoun and shame on the few supporters he has left.

a simple question to phenicien: (hoping he has the guts to answer it!)

would you open the files of your allies also who have stolen from the gvt and send them to prison too?

or you just act out of hatred and revenge against you politcal opponents which then we can not call justice??

Now to the serious stuff, I believe Mikati has a good will and he has seen the free world. shame they put him in this position, shame he chosen that side!

Now to the serious stuff, I believe Mikati has a good will and he has seen the free world. shame they put him in this position, shame he chosen that side!

My apology to Joesikemrex as I pressed thumb down by mistake.
Sorry.

anything but hariri...bsharafkon...he's not funny anymore...