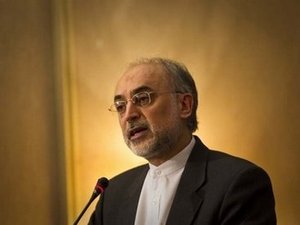 Iran's parliament on Wednesday scrapped plans to impeach Foreign Minister Ali Akbar Salehi after he dismissed a controversial deputy who is close to the president's under-fire chief of staff, reports said.

A group of MPs on Tuesday had launched an impeachment motion against Salehi after he appointed Mohammad Sharif Malekzadeh as a deputy foreign minister in charge of administrative affairs.

Malekzadeh was a top official in the high council of Iranian foreign affairs, run by President Mahmoud Ahmadinejad's chief of staff, Esfandiar Rahim Mashaie, whom conservatives accuse of leading a "current of deviation" aimed at undermining the Islamic regime.

In a bid to defuse the row, Salehi on Tuesday said he had accepted the resignation of Malekzadeh and had appointed Behrouz Kamalvandi, a career diplomat to the post.

The MPs who had been pressing for an impeachment said in a letter they were now withdrawing the action, the ISNA news agency said.

"Since impeachment of Dr Salehi was because he had appointed a person lacking qualification from the deviation circle ... we the deputies ... now that the person has been changed ... after consultation we withdraw our request," the agency quoted the lawmakers as saying in their letter.

"In light of this letter, the impeachment of the foreign minister is terminated," he said.

Ultra- and moderate conservatives, the Shiite clergy and the elite Revolutionary Guards have repeatedly called for Mashaie's dismissal, accusing him of being too liberal, too nationalist and of exerting too much influence over the president.

Ahmadinejad has so far adamantly defended his aides, including Mashaie.

The rift between Ahmadinejad and the conservatives surfaced in mid-April when he challenged a ruling by Iran's supreme leader Ayatollah Ali Khamenei, vetoing a decision by the president to sack Intelligence Minister Heydar Moslehi.

Ahmadinejad withdrew from public life for 10 days, igniting a bitter dispute with the conservatives supporting the supreme leader. Khamenei has since repeatedly urged all factions to rein in attacks on the president and his aides.