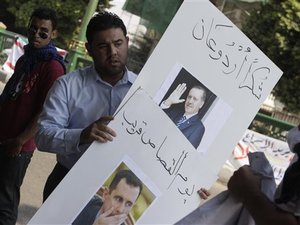 "We are keen on maintaining good relations with Turkey with which we share a common border of 850 kilometers," Muallem told a press conference in Damascus.

"We don't want to wipe away years of efforts to establish privileged ties," he added. "I wish (Turkey) would reconsider its position."

His comments came as Turkey has distanced itself from Syria over its brutal crackdown on a pro-democracy revolt that has threatened the authoritarian rule of President Bashar Assad.

Muallem, however, stressed that his country would not tolerate any foreign interference in its internal affairs.

"We can reach consensus despite opposing points of view," he said. "No one outside (Syria) can impose on us their point of view."

He said he did not believe the international community would launch a military operation against Syria.

"Mr Juppe is still living under the illusions of the French colonial era. He has no influence in Syrian affairs," the foreign minister said.

France is spearheading attempts to get the United Nations to speak out against Syria's deadly crackdown on protests.

On Monday, Juppe said in Luxembourg that Assad had reached "a point of no return."

"Some believe there's still time for him to change his ways and commit to a (reform) process," he said. "For my part, I doubt it. I think that the point of no return has been reached."

Western governments have been circulating a draft Security Council resolution condemning Assad's crackdown but Russia has warned it would veto such a move.

More than 1,300 civilians have been killed and some 10,000 people arrested, according to Syrian rights groups, in the crackdown that has seen troops dispatched to crush revolt in cities across the Middle Eastern country.

Assad on Tuesday ordered a new general amnesty, a day after an offer of "national dialogue" to end the deadly unrest and as a huge crowd rallied in Damascus in his support.

Pro-democracy activists have however rejected Assad's overtures and vowed that the "revolution" would carry on, while the U.S. State Department called for "action, not words."

Muallem on Wednesday said Syria regarded EU sanctions as a "war" against Damascus.

In Luxembourg on Monday, "outraged" European ministers agreed to beef up sanctions on Assad as they cast doubt on his latest offers of change, some demanding he "reform or step aside."

European Union foreign ministers also angrily demanded action at the United Nations and slammed Russia's resistance to any such move.

The ministers said the EU was looking at adding more than a dozen people and businesses to a blacklist of 23 people targeted by an asset freeze and travel ban which already includes Assad and key allies.

Why dont you let the International media in? what are you hiding?
So you have the right to poke lebanon but no one has the right to poke you? The old days are gone.Your army is already fed up with you. any time now they will revolt and turn their guns on you. Remember that the army is from the people you are killing. do you think they are going to kill their families? soon and very soon you will wake up surrounded and shackeled . The russians dont care about you. they want their money . You owe them billions and you dont pay your bills.If the regime change they will deny russia their money and tell them to collect from assad.

Is this the same guy that said Lebanon's streets with flood with blood after the Cedar revolution? He should work on eating less rather than talking tough.

What foreign interference? Don't you see the sign held by a loser saying thanks to the Turkish phony baloney Erdogan? WHAT FOREIGN INTERFERENCE?