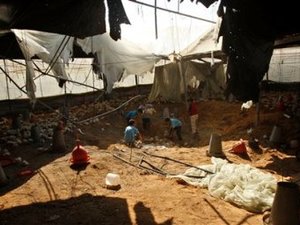 Army bulldozers were seen razing a watchtower on a hill overlooking the village but the military declined to comment on the significance of the operation.

Last year, the defense ministry announced that it would begin altering the course of the barrier around Bilin in conformity with a 2007 Supreme Court ruling that it significantly impinged on the property rights of Palestinian landowners.

Israel says the barrier is designed to prevent attacks but the Palestinians view it as an "apartheid wall" that carves off key parts of their promised state.

When the 709-kilometer barrier is complete, 85 percent of it will have been built inside the occupied West Bank.

"The Israeli army began removing the barbed wire around the village today, four years after the ruling of the Israeli court," said Rateb Abu Rahmah, one of the organizers of the weekly protests in the village.

"The dismantlement of the wall is the fruit of the struggle by the people of the village," he added.

The Palestinians' protests against the barrier in Bilin have met with a sometimes deadly response from the Israeli security forces.

In January, a woman protester, Jawaher Abu Rahmah, died after inhaling tear gas. Her brother Bassem Abu Rahmah died in April 2009 after being struck on the head by a tear-gas canister.

In a non-binding 2004 judgment, the International Court of Justice called for the dismantling of all parts of the separation barrier built on occupied territory.

After a visit to Israel and the Palestinian territories last month, U.N. Under Secretary General for Humanitarian Affairs Valerie Amos described the barrier's impact on the lives of ordinary Palestinians as "devastating".

"I witnessed firsthand the impact of the barrier on Palestinian communities. I was deeply disturbed by what I saw," she said.

"I recognize Israel's concern about security but the impact of the barrier is devastating. It's clear that civilians are bearing the brunt of the continuing conflict and occupation."