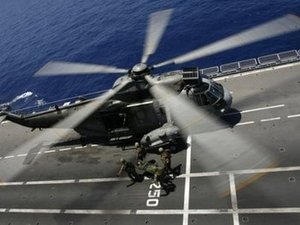 NATO vowed Wednesday to press its bombing campaign in Libya despite a call from member state Italy for a halt to allow the delivery of humanitarian aid as the civilian death toll mounts.

Alliance chief Anders Fogh Rasmussen said more civilians would die if operations were not maintained under a U.N. mandate to protect Libyans from the exactions of the government of veteran leader Moammar Gadhafi.

"NATO will continue this mission because if we stop, countless more civilians could lose their lives," Rasmussen said in a video statement on the NATO website.

The secretary general did not directly refer to Italy, whose Foreign Minister Franco Frattini earlier called for "an immediate humanitarian suspension of hostilities" in Libya.

"We have seen the effects of the crisis and therefore also of NATO action not only in eastern and southwestern regions but also in Tripoli," Frattini told a parliamentary committee in Rome.

"I believe an immediate humanitarian suspension of hostilities is required in order to create effective humanitarian corridors," while negotiations should also continue on a more formal ceasefire and peace talks, he said.

"I appreciate the effort of the Italian government to bring a cessation to the violence taking place and, obviously, to be able to move humanitarian assistance," Bouchard told a briefing.

But he said a ceasefire risked becoming "just an opportunity for both sides to reload and to engage in further violence down the road."

"We must continue to stay engaged to prevent that rearming," Bouchard said.

Frattini's comments had drawn a swift rebuff from NATO ally France which has played a leading role in the military intervention in Libya.

"The coalition and the countries that met as the Abu Dhabi contact group two weeks ago were unanimous on the strategy -- we must intensify the pressure on Gadhafi," foreign ministry spokesman Bernard Valero told reporters.

"Any pause in operations would risk allowing him to play for time and to reorganize. In the end, it would be the civilian population that would suffer from the smallest sign of weakness on our behalf," he said.

The rebels fighting to end Gadhafi's four-decade rule were also dismissive of the Italian ceasefire proposal.

"Even if NATO halts operations, we will fight tooth and nail, we will fight until our country is freed, we don't fear (a NATO cessation)," rebel spokesman Mahmoud Shamam said.

The Libyan people have tasted freedom and will not accept anything less ... they will fight to the end, until victory."

NATO has been forced to defend the credibility of its air war after it admitted firing a rogue missile that Libyan officials said killed nine civilians in Tripoli, two of them children.

"I would suggest that our reputation and credibility is unquestionable," said Wing Commander Mike Bracken, the mission's military spokesman.

"What is questionable is the Gadhafi regime's use of human shields (and) firing missiles from mosques," Bracken said at operation headquarters in Naples, Italy.

The blunder -- an embarrassment for a mission that prides itself on protecting Libya's people from the regime -- came on the heels of a friendly fire incident last week in which a column of rebel vehicles was hit by NATO warplanes.

The outgoing head of the Arab League Amr Moussa too voiced concerns about NATO's bombing campaign, in an interview with a British newspaper on Wednesday.

The veteran Egyptian diplomat, who played a key role in securing Arab support for the U.N. Security Council Resolution that authorized NATO air strikes, told the Guardian the bombing mission may not be working.

"When I see children being killed, I must have misgivings. That's why I warned about the risk of civilian casualties," he said.

Earlier China had said it now regarded the NTC as an "important dialogue partner."

"China views it as an important dialogue partner," Yang said of the NTC, which is based in Libya's second-largest city Benghazi, a rebel stronghold.

Beijing consistently opposes moves deemed to interfere in the affairs of other countries.

But energy-hungry China has held a number of meetings with Libyan rebels in recent weeks in an apparent sign that it wants a speedy end to the conflict in the oil-rich north African state, where it has sizeable economic interests.