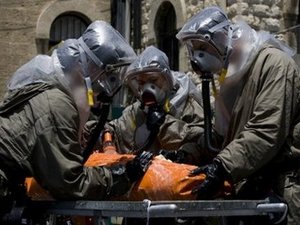 Israel's security cabinet on Wednesday met for the first time in a secret nuclear bunker in Jerusalem, officials and press reports said, as part of a massive nationwide defense exercise.

As air raid sirens cut through the air at 11:00 am (0800 GMT), the 14-member security cabinet was safely ensconced inside the underground bunker which is located somewhere in the hills around Jerusalem, Israel's main newspapers and radio stations reported.

"The security cabinet met for a special session in the new national command center in Jerusalem," a statement from Prime Minister Benjamin Netanyahu's office said, without giving further details.

Details of the recently-built facility were splashed across the tabloids on Wednesday, which said the "situation room" was kitted out with cutting-edge anti-missile defenses and communications technology which could withstand both a conventional and a non-conventional attack.

Ministers in the security cabinet were only informed about the meeting on Tuesday and were ferried over there without aides or mobile phones, the top-selling Yediot Aharonot newspaper said.

Elsewhere, people across the country were holed up inside designated safe areas in their homes, schools or work places where they were asked to remain for 10 minutes. An identical siren test will be staged in the early evening.

The drill is the peak of a major five-day home front defense exercise called Turning Point 5, which began on Sunday with the aim of preparing for a possible wave of massive missile attacks on the Jewish state.

Described as "the largest home front defense exercise in the world," the drill includes simulated scenarios of multiple rockets and missile attacks raining down on Israel from four fronts.

Simulated non-conventional attacks have also been built into the exercise, as well as an attack on the Knesset, or parliament building, in Jerusalem.

Israel came under heavy rocket fire during its 2006 war with Lebanon’s Hizbullah, and the towns and villages near the Gaza Strip have also frequently been hit by rockets from the enclave.