Indonesia to Stop Sending Maids to Saudi over Beheading 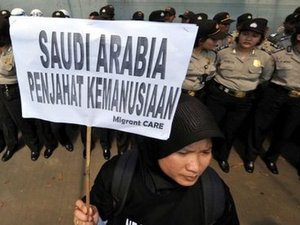 Indonesia will suspend sending domestic helpers to Saudi Arabia after the beheading of a maid convicted of murdering her Saudi employer, a minister said Wednesday.

"The Indonesian government has decided to impose a moratorium on sending workers to Saudi Arabia," Labor Minister Muhaimin Iskandar was quoted by state news agency Antara as saying.

The report did not provide further details but local media indicated the move was aimed at domestic workers, who make up about 70 percent of the 1.2 million Indonesian workers in the Gulf state.

The suspension will take effect on August 1 and will remain until the Saudi government agrees to sign a memorandum of understanding (MoU) to protect Indonesian workers' rights, Iskandar said.

Parliament on Tuesday urged the government to stop sending workers overseas without agreements to guarantee their rights, while key members of President Susilo Bambang Yudhoyono's cabinet have been forced to quit over the persistent abuse of Indonesian migrant workers abroad.

Saudi Arabia apologized earlier Wednesday for failing to inform Indonesia of the Saturday beheading with a sword of migrant worker Ruyati binti Sapubi, 54, while Jakarta formally protested to Riyadh over the execution.

Saudi Ambassador Abdul Rahman bin Mohammed al-Khayyat conveyed his country's apologies during a meeting with Indonesia's Foreign Minister Marty Natalegawa, at which Natalegawa submitted a letter of protest to his Saudi counterpart.

"The ambassador apologized and regretted the situation and said that such a thing wouldn't happen again in future," foreign ministry spokesman Michael Tene said.

Indonesia recalled its ambassador to Riyadh earlier this week for consultations.

Migrant worker Ruyati binti Sapubi, 54, was executed on Saturday after she was convicted of murdering her Saudi employer, Khairiya bint Hamid Mijlid, with a meat cleaver.

The maid carried out the killing after she was denied permission to leave the kingdom and return to her family in Indonesia, according to officials in Jakarta.

In a second case, a court in the Saudi capital Riyadh had sentenced Indonesian maid Darsem to death for murdering her Yemeni employer in December 2007 in what she called an act of self-defense as the employer had tried to rape her.

Indonesian officials had said she could escape the sentence if she received pardon from the family, who forgave her in January on the condition that she pays the compensation or "diyat" of two million riyals ($533,000).

The Indonesian government will pay the compensation ahead of July's deadline, Tene said.

"The full amount has been transferred to the Indonesian embassy in Riyadh and a team from the Foreign Ministry will be flying there tonight to oversee the payment process. We hope her life will be spared," he said.

The women's cases are the latest in a string of incidents involving Indonesian menial laborers in the Middle East.

What a barbaric and retarded judicial system. A victim of rape has to pay compensation (diyat)!!! Foreign domestic helpers need a bill of rights to protect their civil rights in Saudi Arabia, Lebanon and all the region. This should have been a prime concern of the Arab League if it really cares about civility and human rights!