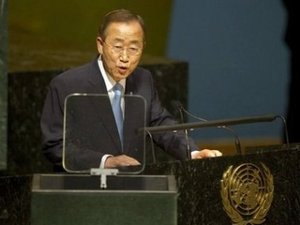 "I do not see much credibility (in) what he has been saying," Ban told a small group of reporters in an interview to mark his reelection as secretary general.

"How long should the situation continue in this way. He (Assad) really has to take firm measures," Ban added.

The U.N. leader said it would be "very helpful" for the U.N. Security Council to speak out on the Syria crisis.

Russia and China have threatened to veto a resolution proposed by European powers on the 15-member council condemning the Syria violence. Despite the deadlock, Western nations have said they will pursue with the campaign to get a resolution passed.

Ban said that "very serious concerns" had been expressed by the whole international community.

"Of course first he has to respect the will and aspirations of his own people. But the international community has shown strong expectations," the U.N. leader said.

Syrian Foreign Minister Walid Muallem on Tuesday rejected foreign interference into the deadly crackdown launched by the Assad government in which more than 1,300 have died, according to rights groups.

Assad is refusing to take telephone calls from Ban who said the pair had argued in their last conversation. But Ban said: "I don't think he has rebuffed me. There is always a possibility that I can talk to him."

Shame on the Arab League for their silence and complicity. Shame on Russia and China for protecting this criminal regime in the U.N. Security Council. My heart goes out to the brave people of Syria for standing up to this criminal thug and his clique...

This US stooge has 5 more years of subservience for his masters, the United States of Affkoles. Sit back and enjoy the dumbness of this fool.