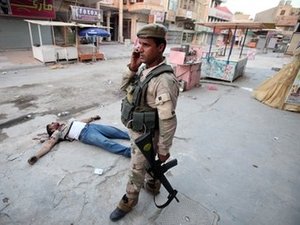 Bomb and gun attacks in Baghdad and northern Iraq on Wednesday killed five people and wounded 36, 15 of them policemen, officials said.

A car bomb in the al-Ghazaliyah district of west Baghdad killed one civilian and wounded nine people, three of them policemen, an officer said.

In the al-Ameriya district of the capital, two improvised bombs targeting a police patrol wounded eight people, six of them policemen, an interior ministry official said.

Three other bombs in the capital wounded 10 people, three of them policemen. Two Iraqi guards were wounded when gunmen opened fire on a visiting Iranian oil delegation, whose members escaped unharmed.

An improvised bomb targeting a police patrol west of Mosul wounded four people, including a woman.

In the central city of Baquba, a bomb planted on a vehicle killed a former member of the former ruling Baath party, which was outlawed after the U.S.-led invasion ousted Saddam Hussein in 2003.

Violence is dramatically down in Iraq since its peak in 2006 and 2007, but attacks against government officials and institutions been on the rise again in recent months.

On Tuesday, two suicide car bombs ripped through a guard post killing 26 people outside the provincial governor's home in the central city of Diwaniyah.

The surge in violence comes with only months to go before U.S. forces are due to complete a pullout under the terms of a 2008 security agreement.