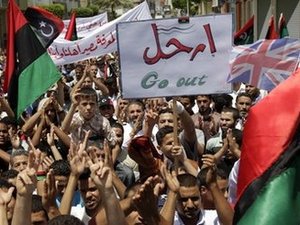 Libyan leader Moammar Gadhafi issued a defiant audio message late Wednesday saying he had his "back to the wall" but did not fear death, and the battle against the Western "crusaders" would continue "to the beyond."

"We will resist and the battle will continue to the beyond, until you're wiped out. But we will not be finished," Gadhafi said in the message broadcast on Libyan television in homage to his comrade Khuwildi Hemidi, several members of whose family were killed Monday in NATO raids on his residence.

"There's no longer any agreement after you killed our children and our grandchildren... We have our backs to the wall. You (the West) can move back," he added.

"We are not frightened. We are not trying to live or escape," Gadhafi said, denouncing what we called a crusade against a Muslim country targeting civilians and children.

NATO has acknowledged its warplanes early on Monday hit Sorman west of Tripoli but insisted the target was military, a precision air strike against a "high-level" command and control node.

Libyan government spokesman Moussa Ibrahim said 15 people, including three children, were killed in the attack, which he slammed as a "cowardly terrorist act which cannot be justified."

Ibrahim said the attack was on an estate belonging to Hemidi, a veteran comrade of Gadhafi.

"By what right do you target politicians and their families?" Gadhafi asked, claiming that Hemidi's office in Tripoli had been bombed four times.

"They were looking for him because he's a hero. When they didn't find him in his office they wanted to kill him in his home," Gadhafi added, calling on the United Nations to send observers to confirm that the NATO target was a civilian site and not a military target.

Gadhafi promised to build a monument; "the highest in North Africa," to four-year-old Khaleda, Hemidi's grand-daughter who the authorities said was killed in the raid.

"We will stay, we will resist and we will not give in. Strike with your missiles, two, three, 10 or 100 years," Gadhafi said.