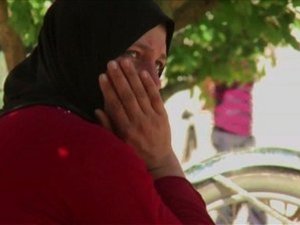 Hundreds of displaced Syrians poured into Turkey on Thursday after Syrian troops backed by tanks approached their makeshift camps along the border, an Agence France Presse journalist reported.

Several hundred people broke through the barbed wire marking the frontier between the two countries and were seen advancing into Turkish territory on a road used by Turkish border guards, a few kilometers from the Turkish village of Guvecci.

They were flanked by Turkish paramilitary police vehicles and minibuses, called apparently to ferry the refugees to tent cities the Turkish Red Crescent has erected in the border province of Hatay, where more than 10,000 Syrians are already sheltering.

Another group of several hundred people was seen further down the same road, walking towards the Turkish security forces vehicles.

Thousands of Syrians fleeing a bloody crackdown on anti-regime protests have flocked to the border but hesitated to cross into Turkey, gripped by uncertainty over their future on foreign soil and wary of leaving behind their properties.

Once at the border they have being living in squalid conditions, in the open air or in makeshift shelters of branches and plastic sheets, surviving on scarce food and water.

They have said Turkish authorities have assured them they can cross over if they felt threatened.

Earlier Thursday, Syrian troops backed by tanks stormed a Syrian border village, where many of the displaced have massed, an activist at the scene told AFP.

Syrian security forces surged into the northern village of Khirbet al-Joz in the early morning, the activist told AFP in Nicosia by telephone, as witnesses on the Turkish side said they saw soldiers and tanks approach the frontier.

A Guvecci resident said he saw soldiers crossing a hill on the Syrian side less than a kilometer from the border at around 6:00 am (03:00 GMT).

A Turkish flag that was raised a few days earlier by Syrian refugees in gratitude for Ankara's hospitality was replaced by a Syrian flag, an AFP journalist witnessed.

People in Guvecci could hear shots and explosions on Tuesday that seemed to come from the hill where the tanks were seen Thursday.

An AFP correspondent saw Turkish police laying sandbags and mounting precision binoculars on tripods on the outskirts of Guvecci.

At the weekend, the Turkish Red Crescent announced it had begun providing urgent humanitarian aid to those massed on the other side of the border.

More than 1,300 civilians have been killed and some 10,000 people arrested, according to Syrian human rights groups, in the crackdown that has seen troops dispatched to crush pro-democracy protests across Syria since March.

Okay... that was tooooooooo f&#king much!!! Little bashar is starting to act like his dad. The world will not accept another hama style genocide.

Somebody do something! As much as we've tried to keep him around it's time for him to go by any means neccesary.

looks like Syrian 100 year civil war is upon them very soon.for Every nation who had a hand in the war of Lebanon feel it 1000 times over.Thank you

To Hizb Iran and the rest of the Persian stooges, it is extremely wrong to have a displaced Palestinian populous, but it is perfectly fine to have a displaced Syrian populous. It is the right of the people to revolt in Egypt and Tunisia, but it is wrong for the same people to revolt in Syria and Iran and south Lebanon. It is not OK for a majority that won the election to govern, but it is OK for the people that lost the election to have a coup and force their opinions on the rest of citizens. It is wrong for the US to kill people in Iraq, but it is OK for the Iranian and Syrian traitors to ASSASSINATE the M14 leaders that disagreed with selling their beloved country to the Persians and the Towel Heads, so being accountable for your actions and facing justice is wrong, this rule applies only if you are a member of the M14 group, the M8 group under orders from Tehran and Damascus should be allowed to assassinate with impunity. And they have the audacity to call others Killers!!