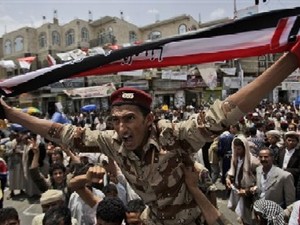 Top U.S. official Jeffrey Feltman called Thursday for an "immediate" transfer of power in Yemen after he met the Arab nation's Vice President Abdrabuh Mansur Hadi, in comments to reporters in Sanaa.

"We continue to believe that an immediate, peaceful, and orderly transition is in the best interest of the Yemeni people," said Feltman, the U.S. Assistant Secretary of State for Near Eastern Affairs.

"We urge all sides to engage in dialogue that peacefully moves Yemen forward," he said.

Feltman's statements come amid growing local and international pressure on Hadi to assume power after embattled President Ali Abdullah Saleh was flown to Riyadh for treatment for wounds suffered when a bomb exploded as he prayed at his palace mosque earlier this month.

The president has made no public appearance since the attack, sparking speculation concerning his situation and casting doubts over the possibility of his return to power.

But Hadi's grip on power is strongly questioned as relatives of Saleh continue to run main security systems. Key among them is Saleh's son, Ahmed, who leads the elite Republican Guard.

"The United States supports the initiative proposed by the Gulf Cooperation Council (GCC) as a credible path to confront the challenging political situation in Yemen," said Feltman.

"We encourage all parties to move swiftly to implement the terms of the agreement so the Yemeni people can soon realize the security, unity, and prosperity that they have so courageously sought and so richly deserve," he added.

Despite strong Western pressure, Saleh has repeatedly refused to sign the GCC-brokered transition plan under which he would hand power to his deputy Hadi within 30 days in exchange for a promise of immunity from prosecution.