Geagea: Those Who Claim to Support the Army Must Lay Down Their Illegitimate Arms 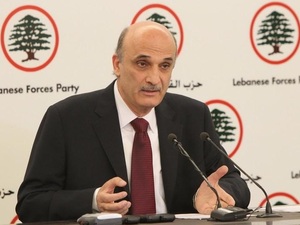 Lebanese Forces leader Samir Geagea lamented on Friday the weakening of the Lebanese state and its institutions, blaming the spread of illegitimate arms for the deterioration of the state of affairs in the country.

He said: “We are fed up with lies. Those who claim to love the army should lay down their illegitimate weapons.”

He made his remarks during the relaunch of the LF-affiliated al-Massira magazine.

“Lebanon is passing through a difficult phase because a party is usurping the role of the state,” Geagea added in reference to Hizbullah.

“Some sides are dragging Lebanon towards the war in Syria not for the sake of defending it against Israel as they claim, but in order to defend Iran and the Syrian regime,” he remarked.

“This dangerous gamble will bring about death and destruction and not change and reform,” he said in a reference to Hizbullah's ally the Change and Reform bloc of MP Michel Aoun.

“Lebanon has become the country of chaos and death instead of the land of democracy, freedoms, tourism, and development,” he continued.

“They want to keep Lebanon in a constant state of war that do not end. They want Lebanon to remain rife with weapons. They want to bring extremists to the country in order to justify their possession of illegitimate arms,” he said.

“We have repeatedly warned of these dangers, but who is listening? Some sides have replaced Lebanon with Iran and others are selling our history for a handful of parliamentary and cabinet seats,” noted the LF chief.

“What is the use of these seats when Lebanon itself has been erased?” he wondered.

“What is the use of gambling on the victory of the murderous Syrian regime, when we have lost our democratic system in Lebanon?” he asked.

“We should not lose Lebanon for a few seats in power after all the sacrifices that have been made over the years,” demanded Geagea.

“Lebanon is being fragmented and we must defend what is left of it because there can be no salvation without an actual state,” he stressed, while demaning an end to the spread of illegitimate arms.

Obviously, Hezbollah doesn't support the Lebanese Army nor trust it. Otherwise they would not need to arm themselves.

Hezbollah is the #1 enemy to the Lebanese Army and the only way for them to prove otherwise it to abandon their illegitimate arms and place their full trust in the army which will protect them like any other lebanese.

Obviously that voids the terrorists HA who's mere existence is to obey the evil Persian regime!

hey persianpatriot2...to eat a heart one must have one....so that nullifies all Shia!

Geagea for president... Whether you like him or not, he is making sense... He is the only war-leader who was sent to jail when all other war-leaders were given seats in the government. It was not fair, but he did not want to kiss Assad’s behind like all other politicians did during the civil war. They created a fake court that was influenced by the Baath party to accuse him of every crime. He went to jail for eleven years, but he never lost faith in his country and he is still fighting for it. He never came out of jail bitter or angry. His faith in God and in Lebanon is very strong… For that, appreciate him and appreciate what he has been working for.. He is working for the whole Lebanon, not for Christians only.

“Some sides are dragging Lebanon towards the war in Syria not for the sake of defending it against Israel as they claim, but in order to defend Iran and the Syrian regime,”

Geagea is 100% correct.... Hizbullah makes no secret about it, it's allegiance is to the Axis and it's survival depends on the Axis. Hizbullah does the fighting, Syria and Iran do the talking and Lebanon pays for the consequences.

M11er and general_puppet you both make perfect sense in what you said...

This is like marrying a woman who has more baggage than the "Louis Vuitton store in Beverly Hills" or the "luggage carousel at the L.A. International Airport". Now substitute Lebanon with the man. Can anyone figure out what is the substitute for the woman in this riddle?

Wrong on both counts ft.,
We do not hate the shia and the army.
We love the army and we think the majority of shia are misguided by HA who is sold out to Iran. The remaining shia who still believe in Lebanon are hated and proseccuted by HA.

the_roar,
No room for the LAF in your formula, which is typical of how HA followers think.