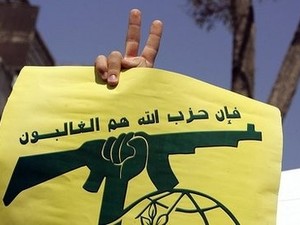 "It is good that the EU has decided to call Hizbullah what it is: a terrorist organization," said Dutch Foreign Minister Frans Timmermans.

"I'm satisfied that we took this important step today, by dealing with the military wing of Hizbullah, freezing its assets, hindering its fundraising and thereby limiting its capacity to act," Timmermans said.

"Agreement reached to list Hizbullah," one diplomat said, as ministers overcame reservations in some member states that such a move would further destabilize Lebanon.

A French diplomat said the decision by the EU's 28 foreign ministers was reached unanimously although it will take time to proceed to actual sanctions.

Hizbullah, which is close to Iran, is Israel's sworn enemy, and its recent intervention in Syria has dismayed Western powers who back rebels battling to oust President Bashar Assad.

British Foreign Secretary William Hague said ahead of the decision that he did not believe that blacklisting Hizbullah "would destabilize Lebanon," adding: "It is important to show that we are united in face of terrorism."

German Foreign Minister Guido Westerwelle also said ahead of Monday's meeting that evidence from the attack in the Black Sea resort of Burgas in Bulgaria, which killed five Israeli tourists and one Bulgarian last year, should give enough impetus for the move.

Westerwelle said that "we have to answer this, and the answer is" blacklisting Hizbullah's military wing.

The attack on EU territory plus a Cyprus criminal court decision in March finding a Hizbullah member guilty of helping to plan attacks on Israelis on the Mediterranean island has galvanized EU diplomacy in moving toward action.

On Thursday, Caretaker Foreign Minister Adnan Mansour asked Brussels not to blacklist Hizbullah on the grounds the group was an "essential component of Lebanese society."

He sent memos to the EU states upon the request of President Michel Suleiman.

A draft of the conclusions seen by Agence France Presse said ministers wanted to highlight the fact that the EU would maintain its political and economic links with Lebanon.

Applying "restrictive measures to combat terrorism does not prevent the continuation of dialogue with all political parties in Lebanon," the draft said.

"Legitimate financial transfers" and aid will also not be affected, it added.

Mansour had expected the EU foreign ministers to fail in declaring the military wing of Hizbullah a terrorist organization over the reservations expressed by some countries.

Among them are Cyprus, Malta, the Czech Republic and Ireland. Belgium and Sweden could join them, he told As Safir newspaper.

Mansour warned that such a decision would be a major blow to the Lebanese states.

He accused some Lebanese politicians of collaborating with the EU and some western diplomats to push for blacklisting Hizbullah's military wing.

finally!
black listing hizbushaitan will lead to crippling their financial activities as well as their travels.

wishful thinking,they will terminate its funds and activities,by that not only the military wing is targeted,all of hizbocrap is targeted

Thank you to the EU for differentiating between the "political" and "military" wings of HA (Hussain Army). Unlike Al Qaeda , Hussain's Army has two wings, just like a bird: One that is political and includes Nassrallah, and his "loyalty" to the resistance parliamentary block, and another that is a ferocious military wing that flies Ayoub drones and fires Kafir I and Kafir II rockets. Bin Laden and Zawahri deserved to be on the terror list coz they were part of the "military" terrorist wing of Al Aqaeda. SHN ( God Bless Him) only speaks via video links and he always calls for dialogue.

They can't and won't include the political wing since, if they do, the rest of the country would be implicated. If you find links supported by clear and convincing evidence that the other side is aiding and abetting other terrorist organizations, let me or us know.

u shell learn to spell before going global

CIA & Mossad are intelligence apparatus controlled by their states and government!
Hezbhaballa is Rogue!

Congratulations to all sane Lebanese. Yes you have not been dreaming. A state within a state leads to terrorizing not only fellow Lebanese but other people on earth. Hizbullah, enjoy the same title as Al Qaeda.

What about the Military Wing of Al Meqdad? Lolol
What happened to these idiots? I guess busy fighting in Syria, maybe sending the special forces of Al Neqdad on critical missions...

great first step into calling them for what they are instead of what they want people to believe.

The article says: Caretaker Foreign Minister Adnan Mansour asked Brussels not to blacklist Hizbullah on the grounds the group was an "essential component of Lebanese society."

Hizbullah as an "essential component of Lebanese society"? Sure, but not as an armed militia. Hizbullah is essential as a strictly political party for the simple reason that it has a constituency. People voted for Hizbullah and the party should further its policies in Parliament. We might not agree with its policies (I certainly don't), but democracy is democracy.

Hizbullah's military wing is bypassing and weakening the state, in addition to causing divisions and rancor in the country.

We don't need Hizbullah's guns. We have a national army. Let's focus on building up its capabilities. If military life appeals to Hizbullah's fighters, let them enlist in the LAF.

Iran's foreign policy is closer to that of the Lebanese and Arab masses than the Zionist foreign policies of the US, EU, and their Arab puppets! Calling HA Iranians IS NEVER worst than calling Arab Collaborators Zionists. M14 supporters can never figure this out.

bigjohn,
Which Lebanese masses do you refer to? HA/SSNP/PNO/and surrogate Palestinian factions (all of those listed have non-Lebanese agenda. So if you want purely Lebanese agenda, you need to reference leaders and parties that believe in the Lebanese State, and those definitely differ greatly from Iran's foreign policy.

Emile Lahoud is busy getting a tan...as always...

Are you still using our English language and wearing our levis jeans!!?. Or using again our internet....why u do not stick to their culo, stop shaving , grow a filthy bear , smell like @@@##@#...and live a primitive life ...ah I forgot u can get yourself some chains and hit your forehead until you bleed...great culture ....time to eat Texas wings and drink monitor...adios la puta que te patio..

'Freezing its assets, hindering its fundraising and thereby limiting its capacity to act," Timmermans said"....HA does not have any assets in Europe and there is a small Lebanese Shiite community there.

This move by the EU is mostly a political move to please Israel and the US who have been pressuring them for years. This WILL HELP HA in Lebanon and the middle east and HURT Lebanese and other Arab collaborators who are close to the pro-Israeli stagnating West. How does this effect the HA military? I guess the "known" HA military members will not be able to freely travel in Europe and it also means they no longer be able to go to Euro Disney

now Israel has a legit reason to bomb a terrorist group instead of a resistance!

They killed the man that gave them international cover and legitimacy, I am sure they are going to miss him now.

Iran's foreign policy is closer to that of the Lebanese and Arab masses than the Zionist foreign policies of the US, EU, and their Arab puppets! Calling HA Iranians IS NEVER worst than calling Arab Collaborators ZIONISTS. M14 supporters can never figure this out.

whatever makes you sleep better at night.

Lebanon depends on its service industry for its income. Now that means tourists coming in from the EU, GCC and the mediterranean who want to spend MONEY here. How does having a foreign policy like that of Iran serve that purpose? Being isolationist with a belligerent foreign policy does not serve this purpose--where do you want tourists to come from, Iran or Syria?

and to top things off, there are over 400,000 lebanese working in the gulf--if they get expelled, who will provide them with jobs and income--Iran. Seriously dude, populist rhetoric is worthless unless you are a member of the unwashed...

I am inclined to believe Iran cares very little for Lebanon.

A no-brainer! Eat your heart out Farsi BSThrower aka Motormouth!

So does this mean there is non-military wing within HA? That's a new concept and I am sure HA are scratching their heads trying to figure this one out!
They are all armored to their teeth so does that mean all of HA is now a recognized terrorist group?

And please, i need 17 THUMBS down, or else i won't be able to sleep tonight.
Bunch of racists

I am sick from reading all these postings on Naharnet. What kind of level does our Lebanese youth have these days. Is all what they know is to bash at each other with no logic? Doesn't Naharnet have an edit0r that can monitor those disgusting postings, or has the paper gone down to that low level as well?

and what about the hizb iran killers who killed hariri and a bunch of other anti syrian politicians--you supporting them too?

If you saw us as lebanese, then we would be the strongest in the Middle East, untouchables together, we Lebanese (touch wood) are a rare bread, wherever we go we find success, Africa, Brazil, Mexico, Europe, smallah, but in our own country, we are like animals.
One day you will know what THE MILITARY WING of HA is worth to our country.
The lebanese army can't do shit, they lost over 20 men against Asir, Israeli warplanes are flying untop of our soil, but that doesnt ALERT you guys, soon they are gonna start stealing our gas, oil, there are already stealing our water.
It is UNACCEPTABLE, HA is the only one standing up for your rights, OUR rights, and yet, they are the problem? the terrorists?

If HA was to disappear (theoretically speaking), Lebanon will wake up to a rosy and fluffy future (assuming armed Palestinians and other armed HA cronies also disappear). The rest are lightly armed and the LAF will take care of them real quick.

You make a very good point. The majority of the other side also have dirty hands. The problems could be solved when people in Lebanon identify themselves as society unique to Lebanon instead of on religious lines.

Or foreign interest with a thirst/greed for their money.

If I am correct, after the 2006 "alleged" war Israel proclaimed next time it attacks Hizballah, they will not spare the rest of Lebanese infrastructure. If there is a silver lining here, it seems like the E.U. and the U.S. is sending a clear message to Israel to stay clear from the rest of Lebanon. I think.

I am against HA arms and its blindness mindset to create a reason for other militias and fanatics to carry weapons as tit for tat. Bravo continue your state within a state operation then expect the president/prime minister and all Gov officials to defend you globally otherwise they are Zionists.
When it comes to punishing HA or any Lebanese group, then we all have a duty to stand by the Lebanese brethren against any other external foreigner. The Lebanese 30 yrs war taught us a lesson that we as Lebanese need to stick to one another because from Palestinian to Syrian/Iranian/Israeli/Americans all played us at some point and assisted one group against the other to their benefits.

Maybe, step by step... or should we say Wednesday after Wednesday after Wednesday the "ASSad" regime will continue to... well... umm... duh... gain more ground, NostraGabbyMarch14? I once knew an idiot who thought he was brilliant until he discovered the truth. I am not sure how many decades it took that idiot to get to that point. May Mar Charbel, the patron saint of Drs. Arteena Satleh, guide you. Until then, keep listening to the predictions of Dr. Arreet 7akeh, alla yer7amak ya bassel