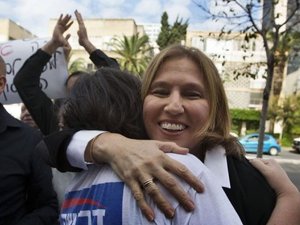 Israeli Justice Minister Tzipi Livni praised the EU decision Monday to blacklist Hizbullah's armed wing, which she said made clear that the party is a "terrorist organization".

"I welcome this announcement by the EU, that Hizbullah is now included in the list of terrorist organizations," said Livni.

"Hizbullah's military and political wings are two faces of the same coin," he stated.

Israel's President Shimon Peres said the EU's decision is a clear message to "terror" groups that their "murderous" actions would not be tolerated.

"I welcome the European Union's decision regarding Hezbollah, a significant and necessary step towards putting an end to the spread of terror across the globe," Peres said.

"Your decision sends a clear message to terror organizations, and the countries which harbor them, that their murderous actions will not be tolerated," he said in a statement.

"I welcome the fact that the EU has also declared Hizbullah to be a terrorist organization and I thank the leaders of its member states," Netanyahu said in a statement.

Hizbullah "has imposed terrorist rule on wide sections of Lebanon, has converted them into an Iranian protectorate and is stockpiling tens of thousands of rockets there."

"These have been placed in the heart of civilian populations and are designed to be fired at population centers in Israel," he said.

The European Union's decision came after some of its 28 foreign ministers overcame reservations in some member states that such a move would further destabilize Lebanon.

To do so, ministers agreed that EU political and economic links with Lebanon would be maintained.

They also highlighted the fact that it is the military wing alone that is blacklisted after Hizbullah was blamed for a deadly attack on Israeli tourists in Bulgaria last year.

Hizbullah, which is close to Iran, is Israel's sworn enemy, and its recent intervention in Syria has dismayed Western powers which back rebels battling to oust President Bashar Assad.

I am a March 14 supporter and despise Hizballah and everyone who supports it but at the end of the day, the "terrorists" are the Israeli Jews.

HA is fighting israel, the EU sides with israel and obeys its command to label HA terrorist.
if there wasn't double standards, the EU would have been arming HA instead of attacking it.

Ya Mowaten ... last time I looked, HA was fighting Lebanese and Syrians. HA hasn't been fighting Israel since 2006 ... that's 7 years ago.

fake mowaten: it's not HA's fault if takfiris are fighting on behalf of israel.
yes it's been 7 years since the last war (7 years in which israel didnt dare attack us like they always did before each summer, mind you) and yes, there will be many more years before israel is destroyed.
what's your logic? that if they dont fight israel everyday they are not fighting it? walla what a strategist you are.

And you're telling me Hezbollah is fighting "Takfiris" in the name of Lebanon ?

Hezbollah has never fought FOR lebanon. They have only fought for themselves and their masters.

Not all Syrian Sunni rebels are takfiris ... far from that ! Most are against these groups in fact so read up a little before jumping to conclusions.

Ba3den even if "takfiris" are fighting "for israel", they are not fighting Hezbollah ... it's Hezbollah that chose to fight them. Not the other way around ... No one provoked Hezbollah. They involved themselves in matters that do not concern them.

Had they not, we would have a new parliament and government today, ...

Agreed. They always have been, always will be until the last signature is signed conceding ownership of stolen land to the rightful inhabitants.

Hopefully then we can more closely examine their countless violations of international law.

Agreed. They always have been, and always will be until the last signature is signed conceding unlawfully occupied lands to the proper inhabitants.

2- You seem to be confused by the situation. No one provoked Hezbollah! Everything you mention is a consequence of the situation. Hezbollah got involved in Syria long before the list of events you mention which are as condemnable as their involvement in Syria.

You believe that the ALL Pilgrims were truely pilgrims and ALL villagers uninvolved in any of the events unfolded in Syria. I don't!

Why was Hezbollah a target, were they already involved in Syria ? If not, why did they let themselves get dragged into this?

Why didn't the Lebanese Government they controlled handle the situation ? No one would have objected!

They don't believe in Lebanon, they don't fight for Lebanon and they will never accept a Lebanon they do not control.

Dear Tzipi.
True HA is indeed a terrorist milicia. But who are you to judge? Israel INVENTED terrorism. The whole concept of Israel is based on taking what is not yours. Stealing the land of a population and kicking them out. Israel created the worst human drama in the part of human history after the end of the second world war and now is rejoicing because a small iranian terrorist tool got blacklisted?

true. israeli militias (haganah, lehi, irgun... look them up) were teh first ones to use terrorist methods in the region. many palestinian civilians were massacred to make them flee, often through terrorist bombings.

For once I agree with you Mowaten ... Israel is and will always be the #1 terrorist. Let's just hope it won't be a race for the #1 Title between Hezbollah and Israel though ... HA is catching up big time ...

Dear Tzipi.
True HA is indeed a terrorist milicia. But who are you to judge? Israel INVENTED terrorism. The whole concept of Israel is based on taking what is not yours. Stealing the land of a population and kicking them out. Israel created the worst human drama in the part of human history after the end of the second world war and now is rejoicing because a small iranian terrorist tool got blacklisted?

Israel invented terrorism? Even those who clearly hate Israel can probably realize that you're retarded and need an historical education.

Irrespective of Tzipi and the gang or other israeli terrorists, it's about time Hezbollah is finally recognized by the EU as the terrorist organisation that it is.

Most the the actions that have led them to be on this list, they do not even deny. So why do you deny them FT ?

By definition, Terrorism is "The use of violence and intimidation in the pursuit of political aims."

Can you deny Hezbollah's use of violence and intimidation ? Can you deny their pursuit of political aims ?

This places Hezbollah on the same grounds as other terrorist organisations including Israel, US, Iran.

FACE IT, Hezbollah is as much a terrorist as Al Qaeda, Assir n the gang and Israel ...

The moment Hassan Nasrallah says : "Guys, let's stop this, this is leading nowhere, TRUCE, lets lay down our weapons and discuss how we can all live together and provide prosperity to our people", then yes, he will deserve a Nobel Peace Prize.

But peace means you have to relinquish your weapons, power and control of your population and let things "be" democratically. Is Hassan up for the task ? I truely doubt, otherwise, he would have gone down this path long ago ...

I must say you have a real "signed name". "The Roar", is it Beit el Roar from the Bekaa or Jnoub ?

I love how frustrated you are, you have nothing else to say except "sign your name" and do "something" to my post that only you can really enjoy ?

I'm sure he's preparing to eat ice cream right now with his family....as he was merely taken into a corner, likely for a spanking, for throwing rocks.

And your story of his treatment, considering Israel's long list of atrocities, is ridiculous.

I don't care what you call Israel. From Lebanese point of view as long as armed Palestinians are living in camps inside Lebanon, Israel is directly implicated and standing in the way of our peace and prosperity. H.A. may, but I don't think Iran gives a damn to the Palestinian cause in general or the direct devastation the Palestinians have caused, and still are a threat, to Lebanon. Iran or H.A. may bark until the cows come home that they are resisting Israeli aggression, but that does not mean that they are committed to solve and rid the Palestinian problem from Lebanon.

"Not on Zionist sites" like this one ? Get the hell out of here.

The first Zionist partner in the region is Hassan Nassrallah serving the interests of Israel more than any other party.

Stop launching baseless accusations against Hariri / Mustakbal. You have 0 proof. Unlike the proof that has lead to Hezbollah ASSASSINS being asked for questionning in many murders.

You're the biggest imbecile ever FT believing that all lebanese against Hezbollah are M14 / Alqaeda loving.

For all I care, you, Hassan, Saudis, and Iranians are all the same breed of low life, stupid ignorant scum of the earth that plagues the very existence out of Lebanon.

I would like to meet you in person one day and have a real debate with you to show you how much of a stupid moron you truely are ! Bring Mowaten with you !