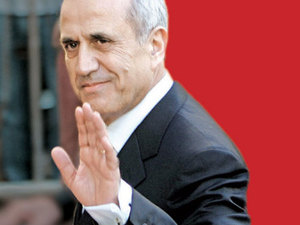 President Michel Suleiman is scheduled to leave Lebanon within the next few hours on a previously unannounced foreign trip, highly informed sources told Naharnet on Monday.

According to the obtained information, Suleiman's final destination will be the United States, "although he will make a stop at one of the European capitals."

And despite the fact that the visit comes only hours after a decision by the European Union to place Hizbullah's military wing on its list of "terrorist organizations" and two days after French President Francois Hollande's phone talks with Suleiman, informed sources in the U.S. told Naharnet that the trip is of a private and personal nature.

The sources added, however, that the presidential palace's circles have put the relevant officials in the U.S. administration in the picture of the trip, without ruling out the possibility that the president might hold certain meetings with U.S. officials on the sidelines of his visit.

Final destination...I guess he had enough of the Lebanese politics... He is going to US to buy himself a farm place a cowboy hat on his head and call himself John Wayne the second...

Have a safe trip and watch your back Mr. President. May your trip reap some fruits for the sake of all of us.

He will receive an outline and a timeline of what to come. Hopefully, this specific designation and targeting of H.A.' military w/o its political wing, may spare the rest of Lebanon from infrastructure damage the next time Iran attacks H.A. which will not solve the ultimate problems in Lebanon.

I wish our president and his wife a safe and enjoyable trip to the US. I hope that when they get there there will be a big sale at some 99 cent store where he can buy her a dozen or so a-la-mode dresses that would make her look elegant unlike the way she has looked during the past 5 or so years, and perhaps even long before that. It's time to change looks from a lumpy eggplant to a fluffier cabbage. No?