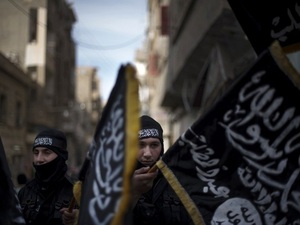 Al-Nusra Front leader Abu Mohammad al-Julani on Monday hit out at Hizbullah for its intervention in the Syrian conflict.

In an audio recording entitled: "The Coming Days are Better Than Those of the Past,” the Nusra leader warned “Shiites in Lebanon not to allow Hizbullah to drag them into a proxy war in Syria on behalf of its Iranian backers.”

"I warn those who claim Shiism in Lebanon about letting Iran drag you into a war that you can't bear," SITE Intelligence, which monitored the posting quoted him as saying.

"I say that abandoning Hizbullah and disowning it will save you from woes and disasters that you would do without."

wow so we are supposed to take advice from a already blacklisted Al-Qaeda based group who bases itself on killing innocent people, and also lives on creating sectarian tensions, and whos only reason for fighting this war is only because they themselves are against any Muslim who doesn't follow them whether they were shia or not ..so to you I say this why don't you go take a long walk of a short cliff

pot calling kettle black here--don't think they are helping their cause.

I agree with you. However, there are more Sunni in Lebanon that do not support extremism like Nusra, than Shiites that do not support HA or Amal. I never met a non-March 8th Shiite. I still think Nusra is in a whole entire league of extremism vs HA. HA is moderate in comparison, and I am not an HA supporter.

only ignorant people support nusra/alqaeda. How can u support some group u dont know anything about them, except they probably intelligence puppets and tools to discredit people fightig for freedom...

Thank you Al-Nusra, we don't need you to tell us that the Lebanese Shiite should and need to distance themselves from the so called "Hezeb Allah". We urge you to keep your religious or otherwise beliefs to yourselves. We urge all Lebanese to keep their religious beliefs within the privacy of their homes and houses of worship and outside the political arena.

do you know that a Sunni sheikh was executed in tripoli for calling for peace?
http://english.al-akhbar.com/node/13080

They can exterminate each other for all I care!

would be good to gather all these radicals in one place and let them weaken each other with no winners.... and at least the civilised people in Syria and surround will have a better future... Turkey is playing with fire and supporting Alnusra, They will probably have their day as well....
Feel sorry for all the innocent people who lost their lives and others who's lives are chattered.