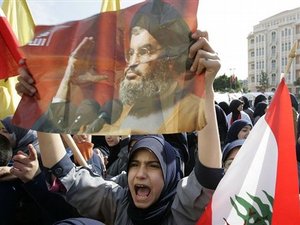 Hizbullah on Monday described the European Union’s decision to blacklist its military wing as a “hostile and unjust” step, saying it was “written by American hands and with Zionist ink.”

"Hizbullah firmly rejects the EU decision... and sees it as a hostile and unjust decision that has no justification and is not based on any proof," the party said in a statement.

The group said the EU's decision was a result of U.S. and Israeli pressure and warned that it did not serve the bloc's interests.

"This decision was written by American hands and with Zionist ink and all that was asked of Europe was to put its seal," it said.

“Hizbullah believes that this unjust decision does not at all reflect the interests of the peoples of the European Union and contradicts with its values and aspirations that support the principles of freedom and independence, which it had always advocated,” it added.

Earlier on Monday, the EU put the military wing of Hizbullah on its of “terrorist organizations.”

To get the required agreement of all 28 EU member states, ministers had to overcome reservations in some members that the move would further destabilize Lebanon, where Hizbullah plays a key role in politics.

Accordingly, EU political and economic ties with Lebanon will be fully maintained in a delicate balancing act.

Hizbullah's military wing was blamed for a deadly attack on Israeli tourists in Bulgaria last year.

In March, a Hizbullah operative was also convicted in Cyprus of plotting a similar attack.

Monday's political decision will be given legal form within days and most likely result in sanctions such as an asset freeze.

In a statement from Washington, U.S. Secretary of State John Kerry said the decision would mean a "crackdown on Hizbullah's fundraising, logistical activity and terrorist plotting on European soil."

Lebanon had asked the EU not to blacklist Hizbullah on the grounds it was an "essential component of Lebanese society."

Support for the EU sanctions against Hizbullah grew in recent weeks after the party openly declared it was sending fighters to back the Syrian regime.

written by American hands and with Zionist ink.................
Does this statement appeal to the mind or the emotions of HA followers?

Yes, thousands of Israeli terrorists have been killed by Hezbollah. They're also responsible for the death of many American terrorists.

nah, it's okay, he's anti-HA so any vocabulary is okay for him :)

Tons of money from private European donators will still continue. Millions and millions. This doesn't change anything. It only adds more credibility and prestige to Hezbollah...

inside_man,
He had to as his assassination was planned with Iranian and Syrian ink and was to be executed by HA hands.

Tons of money from private European donators will still continue. Millions and millions. This doesn't change anything. It only adds more credibility and prestige to Hezbollah :)

Man can you shave at least once....gosh you stink like hell.. no wonder you wash all over to pray...

canada: that must have been the smartest comment i've seen in the last second.

Which enemy did he drink tea with, Syria or Israel?

Before the EU decision all the demonstrations had only HA flags and posters of SHN, Assad and Khameni. Now after the decision all of a sudden they decided to carry a Lebanese flag in their demonstration.
HA does not miss an opportunity to hurt Lebanon and protect Assad/Khameni reputation.

HA always upheld the Lebanese flag, and defended Lebanon's honor and security and territorial integrity and sovereignty while you whiners never did anything but whine.

Brought Iran to Lebanon and furthering the Iranian/religious agenda instead of Lebanese interests.

Both sides, yalla bye. One can stay in S.A. and the other one can go to Iran and leave Lebanon to the Lebanese people; those who want to maintain Lebanese identity, values, customs, etc. w/o religious bigotry and interference in daily life.

I would say at a minimum that HA enabled the Syrian regime specifically its intelligence in Lebanon to harass, target, and assassinate multiple anti-Assad figures in Lebanon over a long period.

He is not my leader ........... my true leaders are mostly dead unfortunately (Bashir is one of them).
What I like about Rafic Harriri is that he put emphasis on education not guns. He was working on getting the Syrian army out of Lebanon resulting in his assassination. He did rebuild Beirut in a way that could not have been envisioned (even though it was also in financially corrupt ways). And he brought the Sunni sect from the fringes of fanaticism into the fold of the State and its institutions (HA did the opposite with the Shiites).

helicopter, you are 100% correct. One lived like a man and tried to move Lebanon forward the other lives underground and takes Lebanon backward.

same talk over and over, he said she said, u did , he did, never ending dispute , until when?

Very funny the Iranian militia "rejects the EU decision"... well that makes all the difference in the world :-)

How come you're not terrorized, NostraGabbyMarch14? Perhaps because you are confident that the "ASSad" regime has fallen just over 7,926 times since you stared predicting it in 2005 and shall continue to fall every Wednesday until you get carpal tunnel syndrome from excessive typing of whatever you hallucinate about? Perhaps then NostraAllouchti who has been away and busy fighting the falling regime that has been gaining ground at an unbelievable pace as all news outlets have been telling us in Persian ink and language will become your transcriber? Hey, gabbaguybo, do you know where you can buy some decency? Definitely not at Me'rab Hospital of Dr. Samir Abou Qtada.

Since when did hizballah ever care about lebanon Gabi? It takes one unfortunate trip to their haven in Beirut to see the lifestyle they promote and their bare foot followers enjoy. This sophisticated society has done exactly what Iran wants in lebanon period. To be deluded enough to be a follower of this cult is reflected in its ability to return Lebanon back to the days of war and pestilence, a war that is unwinable simply for the purpose of Iranian political influence.

Thank you EU. What an ugly picture! Filthy militia.

Lets get real here. Anytime they fall to their own devices, it's a Zionist conspiracy. Grows old like FTs banter.

The EU as a bloc has been the least supportive bloc to Israel out of all Western countries - so much so that they are regularly criticized by Israel and their partners. The moment someone shows common sense we may as well call them either a 'Zionist' or 'terrorist' or 'm14'? Get a life.

'Hostile and Unjust'... coming from assasins, druglords, racists, extremists, terrorists, it's a joke!

Unfortunately, we all know what will happen.
The Political Wing of Hizballah will now set up branches all over the world to get finances for their operations. Perfectly legal.
The moment the money gets to Lebanese soil, the Political Wing will transfer the money to the Military Wing, and nothing will change, except that they will think they are pulling the wool over the eyes of the Western nations, who will then understand and ban the political wing as well.

lol, you have no idea where he is, so you fantasize about bunkers?
many journalists who met him said they met him in dahiyeh at higher levels of normal buildings :)
he also made several speeches in person, knowing the threat against him is F16 flying over, with all the weaponry of the region's strongest army waiting to lock him as a target, that's called cojones ;)

Hezbollah believes that Israel has the power to manipulate 28 individual countries into placing them on a terrorist list.

28 countries who have more political differences, backing and support than anywhere else on earth. From left wing extremists to right extremists...

If 28 countries unanimously agree on placing Hezbollah's "Military Wing" on the terror list, then it's because it's simply true.

Hezbollah is crazy and gives israel too much credit. Not everything is an Israeli conspiracy ... wake up !

Does it really make sense to blacklist the party's "military" wing? What exactly is its military wing and which is its political wing? Even the party itself admits it's all part of the same branch. The EU should either designate the entire party as a terrorist organization or none of it. Half-measures make them look like idiots.

"Using Zionist ink"? Wrong! It's using the Syrian blood that your Iranian Occupation Army (i.e., Hizb) has been spilling.