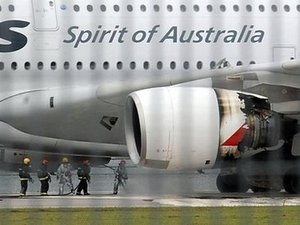 Rolls-Royce shares slumped over 3.0 percent in initial trades on Monday after Qantas said it had found oil leaks in engines made by the British group for the Australian airlines' Airbus A380 superjumbos.

Rolls dropped 3.21 percent to 572 pence, making it the heaviest faller in early trading on London's benchmark FTSE 100 index, which was stable.

Chief executive Alan Joyce said rigorous testing had uncovered the anomalies on the Rolls-Royce engines on three separate aircraft, pushing back the return to action of the long-haul planes by 72 hours.

Rolls-Royce shares have plummeted by 12.5 percent and hence the company's market value by 1.5 billion pounds since Thursday, when a Qantas Airbus A380 was forced into an emergency landing.

The plane had to return to Singapore after one of its four Rolls-Royce Trent 900 engines exploded just minutes into its flight, showering an Indonesian town with debris.

And on Friday, a Qantas Boeing 747 -- which was carrying the A380's captain -- also had to turn back to Singapore after another model of Rolls-Royce engine also failed in mid-air.

Both flights, which were carrying a combined total of 897 passengers and crew, landed safely but some of those onboard spoke of their fear at hearing blasts as the engines failed.

Rolls-Royce has been almost silent in the wake of the incidents, issuing only a brief statement last week to say that it had recommended basic precautionary checks to be carried out on its Trent 900 engines.

Separately on Monday, Singapore Airlines said that its inspections had found no problems with the Rolls-Royce Trent 900 engines used on the carrier's own Airbus A380 superjumbo planes.(AFP)