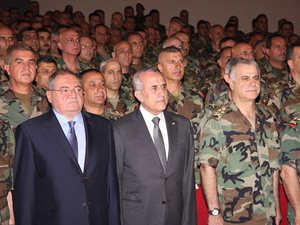 Caretaker Defense Minister Fayez Ghosn denied on Wednesday reports saying that he has inked a draft-law that delays the retirement of Army Chief General Jean Qahwaji, based on article 55 of the defense law.

"I haven't signed the decree yet... We're still mulling the adequate solution for the matter," Ghosn told Voice of Lebanon radio (93.3).

Earlier, al-Liwaa newspaper reported that Ghosn signed the draft law on Tuesday and referred it to caretaker Prime Minister Najib Miqati and President Michel Suleiman for their signature.

The draft-law includes the postponement of Qahwaji's retirement for six renewable months, the daily reported.

Qahwaji turns 60 in September, the age of retirement for army commanders.

However, sources close to the caretaker minister denied to OTV that Ghosn signed any draft-law concerning Qahwaji's mandate.

Sources close to al-Mustaqbal movement said that the extension of Qahwaji's mandate is a priority to confront attempts to destabilize Lebanon's security and stability.

Al-Mustaqbal's decision came after it has allegedly linked the extension of Qahwaji's term to the return of Internal Security Forces chief Maj. Gen. Ashraf Rifi to his ISF command post.

Meanwhile, An Nahar newspaper reported that the decision to extend Qahwaji's term was unanimous.

However, the daily said that Qahwaji prefers that the extension decision be approved by the parliament.

Parliament has so far failed to convene over the veto of several blocs among them al-Mustaqbal to deliberate on 45 draft-laws, including the extension of Qahwaji's mandate.

On behalf of 99.99% of the lebanese people, I want to express my deepest gratitude for Qahwaji's democratic stand and preference for an extension approved by parliament. After all, "our" parliament is the honest and truthful "voice" of the Lebanese people. Similar to what Abdel Fattah Al Sisi of Egypt said, the army takes orders only from the people. Instead of choosing an obscure retirement on your meager 60 foot luxury yacht cruising the Mediterranean and the Caribbean, you bravely opted to continue to serve this holy land of the cedars. For this, "we" the lebanese people commend you and stand behind you as you defend our borders from all dangers.

RFT
If we have no more than " true " Lebanese at Approx. 4 million living in Lebanon right ? Now add a further 7 to a million Palestians refugees plus another 1 to 1.4 million Syrian refugees, true ? Now according to your figures of the 99. 99% of the Lebanese population does not exists , true ? So therefore if you apply a simple mathematic formula of different sects in Lebanon you are simply wrong ! It would be more or less than 9 % according to your figures ! Calculate the deferential of sects divide it by a 100 to get your % that is percentages that you are talking about ! Your " pie " would come out no more than 9 % that you support or claiming that support your argument ! RFT & Naharnet don't delete my post again , censorship does not work as a matter of fact it is the opposite , it exposes your fraudulent posts !