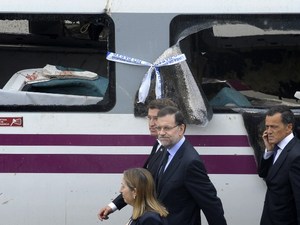 Spain will observe three days of mourning for the victims of a train crash that killed at least 78 passengers and injured more than 140, Prime Minister Mariano Rajoy said Thursday.

"Today I will sign a decree declaring three days of official mourning in all of Spain," he told reporters in his hometown of Santiago de Compostela where the disaster occurred on Wednesday.

"I want to express on the behalf of myself and the Spanish government my condolences to all the families of the people who have died, of which unfortunately there are too many."

Rajoy was accompanied by the president of the region of Galicia, Alberto Nunez Feijoo, who had already declared seven days of mourning within the region.

The cause of the accident is not yet known, but it has been widely reported that the train was travelling well in excess of the 80 kilometers an hour speed limit when it crashed.

He said two investigations were being carried out into the crash, the worst in Spain since 1944, one a judicial probe and the other led by the Investigation Commission for Rail Accidents, which will be overseen by the transport ministry.

"The objective is that we will know as soon as possible what were the causes of this accident."

Meanwhile, under the towering stone arches in the Cathedral of Santiago de Compostela, hundreds of worshipers held a mournful mass on Thursday for the 78 people killed in the crash.

Facing the high gold altar, they prayed to Saint James -- the apostle who gives his name to the cathedral and the city -- for those killed and the more than 140 injured in Wednesday evening's devastating crash on the town's outskirts.

"Saint James, we ask you to keep protecting us always," said one of the celebrants, before clerics in black and red robes and public officials in suits filed out grim-faced to somber strains from the organ.

The veneration of Saint James draws thousands of pilgrims every year to the northwestern Spanish town, many of them on foot, making it one of the spiritual focal points of Roman Catholic Spain.

Walking sticks and rucksacks stood propped against the walls at Thursday's mass, as visitors joined local residents to hear the archbishop of Santiago de Compostela, Julian Barrio, pray for the victims and their families.

"It was an emotional mass," said Jose Luis Perez, 38, visiting from the southern city of Cordoba.

"I hope that they are in heaven and enjoying eternal peace," he told Agence France Presse.

The crash, a brutal pile up of four train carriages on a bend in the track, reportedly at high speed, struck at a poignant time for the city of Saint James, just as visitors such as Perez were gathering to mark the day of the patron saint.

The outdoor festivities were cut short out of respect for the victims.

"I heard that a lot of them were young people who were coming here to celebrate the festival of Santiago," Perez said.

"They lost their lives in tragic circumstances and soon they will be with the Lord."

Incense and hymns were left out of the ceremony.

"It was a funeral mass to pray for the victims and support their families," said Jaime de Olano, a national member of parliament for the nearby town of Lugo, standing on the square outside the cathedral afterwards.

As the nearly two-hour service concluded, long queues made up largely of foreign visitors, formed up the cathedral's steps, waiting for the midday mass.