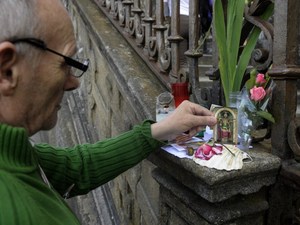 Tired and drained after supporting families of the victims of the train crash in Spain that killed at least 78 people, psychologist Jorge Carballido is amazed by the "human strength" on show.

"The resistance they have, the strength they have," said the 40-year-old, his voice breaking, standing in front of a municipal building in the northern city of Santiago de Compostela.

The modern concrete block has since Wednesday been converted into a meeting point for the families of the victims of Spain's deadliest rail disaster since 1944.

"You can see, they are siting there with a surprising composure, it is human nature, I can't say anything else," the psychologist said, controlling his emotions as he expresses his admiration for the victims' relatives.

A few meters (yards) away, where there are rows of benches facing the building, family and friends of 13 people sit waiting for news of their loved ones.

Their situation is perhaps one of the most difficult following the disaster.

Until officials identify the last of the bodies, some of which are in a very bad condition and need meticulous work by forensic teams, they are officially listed as "missing".

Knowing what happened to a loved one is "vital", said Carmen Regia, director of operations for the Red Cross.

"It is the autopsies that are taking longer, but the families know that there are professionals doing them to make sure they are 100 percent correct," she said.

"They understand and are thankful for it, although there will be more hours of waiting."

The priority now is the identification of the deceased, the mayor of Santiago de Compostela, Angel Curras, said Friday.

It is too soon to discuss a remembrance ceremony, he added.

"I think that Santiago has to have a memorial service but it is too soon, it will take the city a long time to recover."

For the families of the victims, the Red Cross has convinced them to sleep in hotels so that they do not stay awake all night.

Over 100 relatives are staying in the city, in hotels but also in private, university and religious accommodation, according to city officials.

Even at midnight cars continued to pick up relatives to take them to a nearby sports center where the bodies are being held.

It is a slow and exhausting process that has been going on since Thursday after a train bound from Madrid to the coastal town of Ferrol derailed on a curve just a few kilometers from the city's main station late Wednesday.

The first indications from the ongoing investigation are that the train was travelling at a speed well in excess of the permitted limit.

"When the families arrive, we take their details and give them psychological support. Once the autopsy is done, the forensic teams telephone here, we inform the family and accompany them to the morgue," explains Carmen Martin, health director for the Spanish Red Cross.

As if to verify what she has just said, a white police 4x4 pulled up in front of the door to the center and picked up a woman and two men.

Their faces were etched with grief, having just found out that one of their relatives has died.

It is a scene that will no doubt be repeated.

"What we have here is the greatness of humanity, the test that when we are pushed to the limit and put in difficult situations, we know how to respond," said Carballido, who works as a psychologist in a municipal center that helps people combat drug addictions.

"There are people who don't ask for absolutely anything. What are you going to say to someone who has lost a loved one? Nothing. The greatest support comes from the relatives more than the professionals," he said.

"We are working on adrenalin. But in two or three days we will definitely all begin to feel it in a big way."