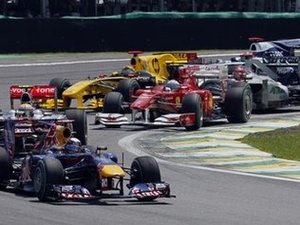 Sebastian Vettel took the lead at the first corner and cruised to victory at the Brazilian Grand Prix on Sunday, setting up a showdown for the Formula One title at next weekend's season-ending Abu Dhabi Grand Prix.

Alonso was the only driver who could have won the championship Sunday, but his third-place finish was not enough. Alonso remains atop the standings with 246 points, while Webber has 238 and Vettel 231. Hamilton has 222 points and remains mathematically in contention. Alonso can clinch his third F1 title with a second-place finish in Abu Dhabi.

"In terms of points we are happy," Alonso said. "The championship is very open now. With the win, Sebastian is another strong contender. We will see what we can do in Abu Dhabi."

Defending champion Jenson Button of McLaren, who was nearly robbed by armed men outside the track the night before the race, finished fifth to end his shot at winning two straight titles.

Vettel got a good start from second place to pass pole pole-sitter Nico Hulkenberg of Williams and never looked in trouble.

"It's an incredible day," Vettel said. "I had a good start. I saw that Nico had too much wheel spin and used my momentum. There was just enough room there."

Vettel and Webber pulled away from the field after getting past Hulkenberg, but they temporarily lost their advantage when the safety car was came out on the 51st lap because of a crash by Force India's Vitantonio Liuzzi.

Hamilton made an extra pit stop under the safety car, but was unable to gain on the leaders despite the fresh tires.

"I had no grip," Hamilton said. "I feel quite lucky to have finished where I finished. We'll go to the next race with nothing to lose. We will just keep pushing."

It was Vettel's fourth win this season, and the eighth overall for Red Bull, which has had the dominant car this season. But the team went into the final two races without a comfortable advantage in the standings because of missed opportunities during the season, including driver mistakes and mechanical failures.

"It has been an extremely difficult season for us," Vettel said. "We had people talking us down. It was good to show them what we are made off."

Red Bull reached 469 points to clinch the constructors' title ahead of McLaren with 421.

Webber, who won last year's race in Brazil, said he was not able to push harder because of an overheating engine, but was satisfied with the result.

"We are absolutely still in the run," he said.

The 29-year-old Alonso is trying to claim his third F1 title, after winning with Renault in 2005 and 2006. He could have won it with a victory Sunday if Webber had finished fifth or worse. A second- or third-place showing also could have been enough if his rivals had faltered.

"I lost too much ground at the start of the race," said Alonso, who started fifth. "But overall it was a good race for us, being on the podium and overtaking Hamilton and Hulkenberg, which we knew wasn't going to be easy."(AP)