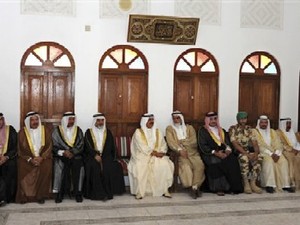 Bahrain on Monday announced a high-ranging "national dialogue" opening on July 2, although the largest Shiite opposition bloc said it has not yet decided whether to take part.

"The National Dialogue chairmanship has received views and recommendations" on parliament, the cabinet, electoral districts, citizenship, corruption and sectarian issues, the government said in an English-language statement.

However, a member of the Islamic National Accord Association (Al-Wefaq), Khalil Marzooq, said his Shiite bloc was undecided over whether to take part.

"Al-Wefaq has not taken an official decision on whether or not it will participate in the national dialogue," Marzooq said in comments published on the group's Facebook page.

Al-Wefaq leader cleric Sheikh Ali Salman said Saturday that the regime's actions were not encouraging, describing Dhahrani as "someone who does not believe in change."

Shiite-led protests in the Sunni-ruled kingdom began demanding democratic reforms in mid-February and lasted one month before they were crushed by Bahraini security forces, backed by troops from Arab states in the Gulf.

The opposition demanded a proper constitutional monarchy in which the prime minister would be elected, and in which the elected chamber would be vested with exclusive legislative and regulatory powers.

On June 1, King Hamad announced the lifting of a "state of national safety" he had decreed and offered talks, led by Dhahrani. But Salman said the opposition has been "marginalized" in the dialogue.

Al-Wefaq, which had 18 out of 40 MPs in the Shiite-majority state's parliament before they resigned in protest at the clampdown, was invited to choose only five representatives out of 300 taking part in the dialogue, Salman said.

"We are still living in a crisis and amid a continuing security campaign," Marzooq said.

A Bahrain court last week sentenced eight leading Shiite opposition activists to life in prison for "plotting to overthrow" the monarchy. It also jailed 13 others for between two and 15 years on similar charges.

The sentences drew widespread condemnation from the United States, the United Nations and rights groups.

Scores more activists, including two members of Al-Wefaq, are facing trial on charges linked to the protests in a semi-martial court set up under the state of national safety.

Bahrain's interior ministry has said 24 people were killed in the month-long unrest.

Four people have been sentenced to death and three others to life in prison over the killing of two policemen during the protests. Nine others were jailed for 20 years after being convicted of abducting a policeman.

The opposition says dozens of protesters have been arrested -- amid claims of torture -- and hundreds of Shiites dismissed from their jobs since the protests.