At Least 40 Killed in Arms Depot Blast in Syria's Homs 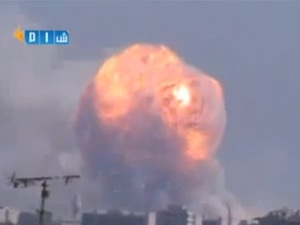 At least 40 people were killed in an ammunitions depot blast Thursday in a government-held area of Homs in central Syria apparently triggered by rebel rocket fire, a monitoring group said.

The Syrian Observatory for Human Rights, which earlier reported 22 killed, warned that the death toll could rise further as many of the 100 people wounded were in serious condition.

The rocket fire followed the government's capture on Monday of the Khaldiyeh district of the flashpoint city that had been in the hands of mainly Sunni rebels for the past two years.

The ammunitions depot blew up in the pro-regime Wadi al-Zahab district "after rocket fire, most probably by rebels," said the London-based Observatory, which relies on a network of activists and medics for its information.

It said the depot was operated by pro-regime militias.