Citizens Rally in Support of Military Institution on Army Day 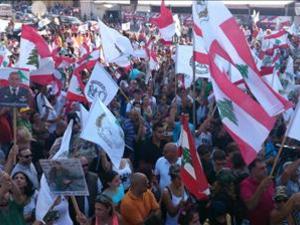 Hundreds of citizens demonstrated on Thursday at Beirut's Martyrs Square in support of the military institution as Lebanon marked the 68th Army Day.

Demonstrators carried banners saying “You love the army? Don't aim your weapon at it” as well as Lebanese flags and the flags of the army.

A huge picture of slain Maj. Gen. Francois al-Hajj, who was assassinated in a 2007 car bombing, was also erected at the square.

“Anyone facilitating terrorism in our country is a conspirator and a partner in crime … the army is the side to hold others accountable and it is the only party that is above all suspicions. We apologize from you, our heroic army, we apologize for they have insolently called for putting you on trial,” al-Hajj' son, Joe, said in a speech at the rally.

"The experiences of the 'hot heads' have proved their failure in Arsal, Tripoli, Mar Mikhail and Abra,” he added.

“I will not renounce my words … I pride myself in this institution,” singer Zein al-Omor said during a TV interview at the rally, when asked about his recent fiery remarks.

The singer had launched a vociferous verbal attack against Islamist cleric Sheikh Ahmed al-Asir and his close aide, singer-turned-Islamist militant Fadel Shaker, over their role in the deadly Abra battle against the Lebanese army in which 18 troops were killed.

For his part, former interior minister Ziad Baroud said at the demo: "I'm here as a citizen and no one has any calculations or interests ... We are here to say that we're with this institution and supporting those who sacrificed for us is the least that we can do."

“The strange thing is not being here and what's more strange is that there are some people who do not consider that this institution is above all political alignments,” Baroud added.

“Those who have reservations over the army's performance must pass them on to its command, not to media outlets, in order to keep the army outside political polarization,” the former minister went on to say.

Meanwhile, a number of protesters called for rejecting the recent extensions of the terms of office for the 128 lawmakers and Army Commander General Jean Qahwaji, amid the presence of a caretaker cabinet, as one of them said, “Let the army rule.”

The sit-in at Martyrs Square comes after a central Army Day ceremony was held at the Shukri Ghanem barracks in Fayyadiyeh earlier on Thursday, which traditionally involves a graduation ceremony for officer cadets.

On June 23, gunmen loyal to al-Asir attacked an army checkpoint near the Islamist cleric's mosque in Sidon's Abra. Eighteen soldiers were martyred and 20 others were wounded in the attack and in the fierce clashes that ensued.

At least twenty of Asir's gunmen were also killed in the battle that ended when the army stormed Asir's headquarters on June 24.

In the wake of the clashes, two videos showing army troops abusing detainees allegedly linked to Asir were circulated on social networking websites. Human Rights Watch also urged an independent investigation into claims that a man identified as Nader al-Bayoumy had died under torture while in the custody of the army.

The fighting in Abra was among the worst in Lebanon since the outbreak of conflict in neighboring Syria 27 months ago deepened sectarian tensions.

It highlighted widespread Sunni resentment against the army, accused of siding with Hizbullah and being selective in its crackdown on armed groups.

The army referred the troops who appeared in the videos to the Military Court and launched a probe into the alleged abuses, amid an outcry led by Sidon MPs Fouad Saniora and Bahia Hariri and the Jamaa Islamiya.

I think the people (Lebanese) should perform a sit in Dahye, South Lebanon, and HA areas but in more massive numbers. If someone organize a huge one, I will definitely join that day