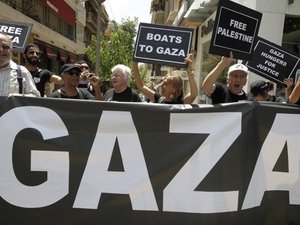 Foreign Minister Avigdor Lieberman said on Tuesday that Israel's diplomatic and political efforts to curb the size of a new Gaza-bound aid flotilla had been successful.

Speaking to public radio by telephone from Zagreb where he is on a visit, Lieberman said it was thanks to Israeli efforts that there were only 10 ships planning to set sail from Greece later this week.

"Our ambassadors and diplomats have conducted hundreds of discussions, and ultimately the number of ships and passengers is less than expected," he said.

"Many of those we spoke to understood it was possible to deliver aid to Gaza through the ports of Ashdod (in southern Israel) and El-Arish (in Egypt) or through the United Nations," he said.

Organizers had initially said there would be up to 15 ships participating in the convoy seeking to break Israel's five-year blockade on the Gaza Strip which is home to 1.5 million people.

Like most Israeli officials, Lieberman was particularly pleased by the announcement earlier this month that the Turkish-owned Mavi Marmara ferry would not be participating.

The Marmara became famous in May 2010 when it was raided by Israeli troops as it led a six-ship convoy towards Gaza. Nine Turks were killed in the ensuing confrontation between activists and soldiers on the boat, with the bloodshed sparking a severe diplomatic crisis between Turkey and Israel.

The ferry is owned by a Turkish NGO called IHH, which played a leading role in organizing last year's flotilla and which has been accused by Israel of supporting Gaza's Hamas rulers and of supporting terrorism.

Although the Marmara will not be sailing, Israel is expecting that some IHH members will participate in the flotilla, and officials have warned that various activists with a violent agenda are planning to join the convoy.

But Lieberman insisted that Israel would be able to handle them.

"Among them, there are several activists with ties to terrorism who are purposely looking for violence and bloodshed for the TV cameras, but I think we will be able to face them," he told the radio.

Israel's security cabinet on Monday ordered the navy to "be determined" in stopping the flotilla from reaching Gaza in breach of the blockade which it imposed on the territory five years ago after militants there snatched Israeli soldier Gilad Shalit in a deadly cross-border raid. He is still being held.

A ban on civilian goods and foodstuffs was eased last year but many restrictions remain in place.