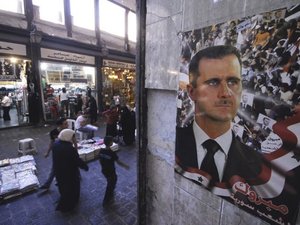 "It is prohibited to make payments, reimbursements, commercial transactions and any other commercial operation in foreign currency or in precious metals," it quoted the decree as saying.

"The Syrian lira is the only currency" allowed in business and commerce, SANA added.

Those breaking the law risk jail sentences of between six months and 10 years of hard labor, depending on the sum involved, and a fine.

The U.S. dollar is the preferred foreign currency in Syria where the lira has lost three quarters of its value against the greenback since the outbreak of the anti-regime uprising more than two years ago.

At the start of the conflict in March 2011 one dollar fetched 50 liras, while a dollar today is worth more than 200 liras.

Dollars have been used in the sale of land, namely in the upscale Damascus suburbs, and by importers who trade in goods such as rice, sugar, textile and electronic equipment.

"The measure is symbolic because it comes 10 years almost to the day after Bashar Assad cancelled law 24/1986, which very strictly forbade Syrians from having dollars in their possession," said Jihad Yazigi, director of financial weekly the Syria Report.

"Today's decision is aimed at making it very difficult to make any transactions in anything other than the Syrian lira," Yazigi told AFP, adding that the goal was to "control the exchange rate".

Objectively, an economically responsible decision to prevent the Lira from deteriorating further.