6 Jailed in UAE over Arms Smuggling to Yemen 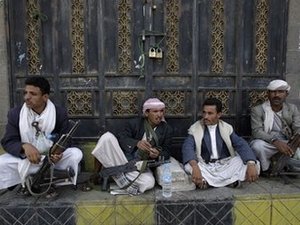 An Emirati court has sentenced six people to between three and five years in jail for trying to smuggle weapons from Turkey to Yemen in an operation foiled by Dubai police, a newspaper reported on Tuesday.

"Six men were sentenced to prison for their roles in trying to ship 16,000 pistols through Dubai into Yemen," said The National.

The English-language daily said a state security court on Monday sentenced two Omanis and three Egyptians to five years in jail, along with fines of 15,000 dirhams (around 4,000 dollars).

A cargo clearance officer in Turkey was jailed for three years and fined the same amount, according to The National, while five other defendants -- three Egyptians, a Qatari and an Indian -- were acquitted.

Dubai police in March announced they had seized the consignment of pistols made in Turkey, which were apparently destined for Saada in northern Yemen, the stronghold of Shiite rebels.

In what was the largest arms bust announced by the UAE, the weapons were concealed in cases in a container of furniture from Turkey.

An on-off revolt in northern Yemen since 2004 between Shiites and the Sanaa government, the target of mounting anti-regime protests over the past five months, has cost several thousand lives and displaced more than 250,000 people.