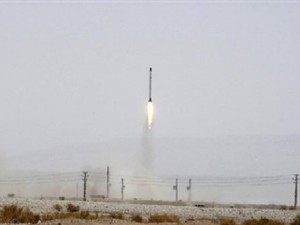 Iran's elite Revolutionary Guards fired 14 missiles in an exercise Tuesday, one of them a medium-range weapon capable of striking Israel or U.S. targets in the Gulf, state media said.

"Today, on the second day of the exercise, we fired Zelzals (Quake), Shahabs (Meteors) 1 and 2, and the Ghadr (Power)," a medium-range missile which is a modified version of the Shahab-3, Hajizadeh told state television.

He said the missiles were not a threat to European nations.

"Iran's missiles have a maximum range of 2,000 kilometers (1,250 miles) and are designed to reach U.S. targets in the region and the Zionist regime," the official IRNA news agency quoted him as saying.

"The Zionist regime is 1,200 kilometers away from Iran and we are able to target this regime with our 2,000 kilometer range missiles from Semnan and Damghan (in central Iran)," he said.

"We have the technology to build missiles with a longer range but we do not need them and we are not seeking to build such missiles."

Iran has said that its latest exercise is not aimed at any country but carries "a message of peace and friendship."

Iran unveiled the Ghadr, which has a range of 1,800 kilometers, following a successful test in September 2009.

The Zelzal is an unguided surface-to-surface missile with a maximum range of 400 kilometers.

The Shahab-1 and -2 have a range of 300 to 500 kilometers and are based on the Soviet-designed Scud.

On the first day of the exercise on Monday, the Guards unveiled an "underground missile silo" which they said was designed for launching their medium-range missiles, state television reported.

The broadcaster showed footage of a facility at an unknown location, containing a missile it identified as a Shahab-3.

"The technology to build these silos is completely indigenous," the state television website quoted the exercise's spokesman, Colonel Asghar Ghelich-Khani, as saying.

State television also showed a missile launch, without specifying its type or when the firing took place.

Iran's missile program, which is under the control of the powerful Guards, along with its space projects, has been a mounting source of concern in the West.

Western governments fear Tehran is developing a ballistic capability to enable it to launch atomic warheads which they suspect Iran is seeking to develop under cover of its civil nuclear program.

Tehran denies any such ambition.