Saleh to Speak on TV to 'Reassure' Yemenis 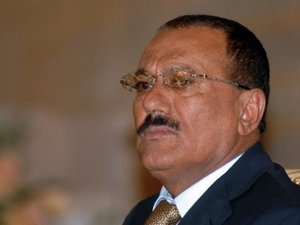 President Ali Abdullah Saleh is to speak on television within days to reassure Yemenis on his health, three weeks after being hospitalized in Riyadh with bomb blast wounds, a senior official said on Tuesday.

A United Nations mission, meanwhile, started a 10-day visit to examine the human rights situation in Yemen after five months of street protests against Saleh and deadly clashes with security forces.

"A team from Yemeni television headed to Riyadh on Monday to carry out an interview with the president, expected to be aired after Thursday," the deputy information minister, Abdo al-Janadi, told Agence France Presse.

"In this interview, Saleh will address the Yemeni people to reassure them about his health," said Janadi.

Yemen's embattled leader, Saleh, 69, was flown on June 4 to Riyadh for treatment from wounds sustained in a bomb blast in the mosque of his presidential compound in Sanaa.

The ruling General People's Congress party, on its website almotamar.net, said the president in his television interview would address "the coming phase in Yemen and the steps expected for political reform."

On his return from Riyadh, Saleh's advisor Abdel Karim al-Iriani said on Monday that the president was in "good health and spirits," but without giving further details.

Iriani said he had discussed "several national issues" with Saleh who gave him the "necessary directives."

The veteran leader has faced nationwide street protests against his 33-year-long autocratic rule. He has not appeared in public since the bomb attack which killed 11 people and wounded 124 others, among them senior officials.

In his absence, Vice President Abdrabuh Mansur Hadi has come under pressure from the parliamentary opposition and the West to assume power, while protesters demand he form an interim ruling council.

But Janadi has ruled out any transfer of power in Yemen while Saleh remains hospitalised in Saudi Arabia.

On Tuesday, a mission sent by the United Nations High Commissioner for Human Rights landed in Sanaa, after the Security Council last week expressed "grave concern" over the violence in Yemen, state news agency Saba reported.

They were to start by meeting Saleh's son Ahmed who commands the elite Republican Guards, his nephew Yehya who heads the central security services, and Tariq, another nephew controlling the presidential guard, a team member told AFP.

The team was also to hold talks with Hadi and with powerful dissident tribal chief Sheikh Sadiq al-Ahmar, whose fighters were locked in more than a week of deadly clashes with Saleh's troops that ended earlier this month.

Medics and tribal sources say at least 300 people were killed in the battle which rocked Sanaa, prompting scores of residents to flee to neighboring towns and cities.

Rights activists, opposition members and victims of violence were also lined up to meet with the U.N. mission, which plans to visit medical and detention centers.

At least 200 people have been killed by troops loyal to Saleh in anti-regime protests which broke out in late January.