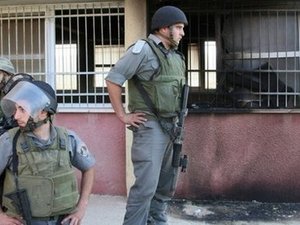 Three of them were arrested in the early hours in the northern city of Nablus, while a fourth was picked up in Salfit, a town some 15 kilometers further south, they said.

In Nablus, troops arrested three MPs -- Nawaf Amer, who is also a journalist for the al-Quds television channel, Fuad Khofash, director of the Ahrar centre for prisoners and human rights, and Firas Jarrar, a former prisoner.

And in Salfit, they picked up local MP Nasser Abdel Jawwad.

The army had no immediate comment on the arrests, which bring to 17 the number of Hamas parliamentarians detained by Israeli troops over the past eight months.

It also raises to 10 the number of Hamas MPs detained by the army since the Islamist movement signed a surprise reconciliation deal with its Fatah rivals at the end of April, in a move which was roundly condemned by Israel.

Most of the Hamas MPs who have been picked up were among 64 of the group's members who were arrested during a major army sweep in summer 2006 after militants in Gaza snatched Israeli soldier Gilad Shalit.

Shalit, now 24, is still being held in Gaza and attempts to broker a prisoner exchange deal between Israel and Hamas have led nowhere.