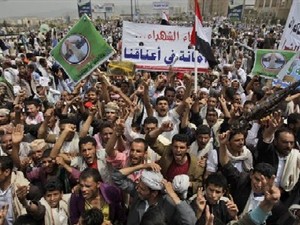 Three French aid workers kidnapped in southeastern Yemen a month ago have been "located" and are "alive," the deputy information minister told reporters on Tuesday.

"Security services have managed to locate the French. They are alive," Abdo al-Janadi said.

Yemeni authorities "cannot provide any information on the kidnappers or their demands to ensure the safety of the investigation and to secure their release as soon as possible," he added.

The three -- two women and a man -- were kidnapped in the Hadramawt town of Seyun, 600 kilometers east of Sanaa on May 28.

The trio are part of the French non-governmental organization Triangle Generation Humanitaire, and were working with a group of 17 Yemenis in Seyun.

"They were kidnapped because they had written a letter to Yemeni security services asking not to be accompanied by anyone for protection," said Janadi, who added that their demand was accepted.

A Yemeni security official had said their car was found on the road some 20 kilometers from Shibam, a city known as the "Manhattan of the Desert" because of its spectacular high-rise mud-brick buildings.

Foreigners have frequently been kidnapped in Yemen by tribes who use the tactic to pressure the authorities into making concessions.

More than 200 foreigners have been kidnapped in Yemen over the past 15 years, with almost all of them later freed unharmed.