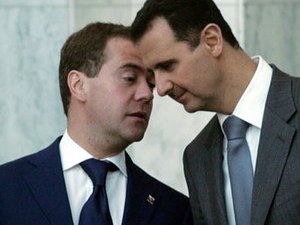 A visiting Syrian opposition delegation urged Russia on Tuesday to use its diplomatic clout to convince President Bashar al-Assad to give up the use of force against civilians.

"Russia can use its leverage on the Syrian regime to send a clear message that this way of behavior is unacceptable," said rights advocate Radwan Ziadeh, who is head of Damascus Center for Human Rights Studies in Washington.

The group was in Moscow for a day of talks with the Kremlin's special representative to Africa Mikhail Margelov.

Russia has blocked United Nations attempts to condemn Assad's bloody crackdown on street protesters and expressed fears of international forces getting involved in the conflict just as they had done in Libya.

Moscow has also urged Assad to follow through on political reforms and Margelov repeated that message on Tuesday.

"Russia is seriously concerned by what is happening in Syria," Margelov told reporters after the Syrian meeting.

"We are interested in ensuring that things do not evolve along the Libyan scenario," he said.

"We want the reforms announced by the Syrian government to become real, and the peace process to involve representatives of all religious groups and confessions," Margelov said.

Russia has been a key arms supplier to the Syrian government since the Soviet era.

Medvedev last May became the first ever Russian or Soviet head of state to travel to Damascus where he promised Assad help in developing Syria's oil and gas infrastructure.