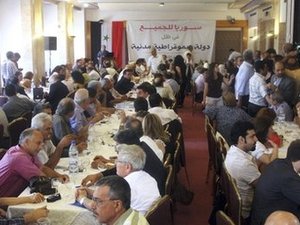 Anti-regime activists behind street protests in Syria on Tuesday criticized opposition figures who held an unprecedented meeting in Damascus at which they called for a peaceful uprising.

"As a matter of principle, the Coordination Committees of the Syrian Revolution condemn any meeting or congress held under the banner of the regime," they said on their Facebook page, an engine of the revolt.

"Revolutionaries must take dozens of security and dissuasive measures before they can hold such a meeting, so as to avoid being jailed, tortured or eliminated," they said in a statement.

"It's only natural that questions are raised by this meeting which claims to come from the Syrian street when the Syrian regime gave its protection and media coverage, counting on it to build a civilized and legitimate image," they said.

"Nobody should have given a drop of legitimacy to the regime at the expense of the blood of our martyrs and the suffering of the detained," the statement read. "The Committees renew their commitment to the Syrian street."

A key activist and supporter of the street protests, Rami Abdul Rahman, said demonstrations calling for President Bashar al-Assad's fall and to condemn the Damascus meeting were staged on Monday night in several cities around Syria.

Thousands protested in the central city of Homs, in Hama and Deir Ezzor, both to the north of the capital, the northwestern province of Idlib, in Latakia on the Mediterranean coast and in districts of Damascus, he said.

"They reject any dialogue with the government," said the head of the London-based Syrian Observatory for Human Rights.

He said there had also been arrests in various parts of the country.

About 160 dissidents, several of whom have spent years in jail as political prisoners, vowed at Monday's meeting to press ahead with a peaceful uprising, as Assad's embattled regime invited the opposition to talks.

The opposition figures, all independent of any party affiliation, met in a Damascus hotel.

In the face of deadly unrest that has pitted pro-democracy protesters against security forces since mid-March, the authorities on the same day invited the opposition to a July 10 meeting to discuss key changes to the constitution.

BigDig you are a big ass.

Bigdig... are u serious dude? Do you operate out of the Hizballah propaganda center? It seems like you are salaried to spend time on different Lebanese web sites and post pro-hizb newspeak. Go sell that B.S. on al manar man. You're worse than the israelies. Have some respect for yourself.

bigdig: simple question: have you seen salafis shooting at armed forces? where do you take your infos from? syrian tv?

even this tv never showed such images because they can t...

@ Moallek ,
Respect yourself and respect the site .
If you love them so much , go and fight with them , your Salafi brothers and terrorists ! Dont try to mopve your tale in Lebanon because we are watching you , and we wont make you gifts this time ........ Watch your tongue when you address honest people like Bigdig .

how come my earlier comment were never posted by Naharnet!!

Keep digging bigdig, and there you go quoting Sana and it's unnamed but high intelligence ranking sources.
The Sunday times reporter spotted a few people with pistols then the shooting started, be as it may you don't confront a handful of gunman with pistols in a crowd of 5000 unarmed marchers with tanks.
Do you remember a few month ago the wiki leaks saying that the Syrian government was behind the Islamist riot that attacked the Norwegian and danish missions in Damascus you like wiki leaks don't you.
This regime has shown time and time again in Lebanon its effectiveness in creating a problem then offering to solve it. Why was Shaker al Absi released early from Syrian jail and sent to Lebanon to a Syrian controlled Palestinian camp, he was in jail for terrorism wasn't he. Who blew up Rene Mouawad to open the door to the Syrian friendly Hrawi. Who was behind the insecurity west Beirut in mid 80s then offered to "help". Who blew up the Saydet al Najat and tried to frame the LF....

I disagree with Bigdig. The Syrian government has commited war crimes in Syria, but not near as much as Israel and the USA in their wars of aggression. As far as lebanon, the biggest war crminals have been the LF/Phalangists.

This article does not explain between who the rift is. The Ikhwan controlled the meetings in belgium and Turkey. The main reason why they were against the damascus meeting is because they were not allowed to control it.

Qamerade QawmyJohn good one "The Syrian government committed war crimes in Syria" and non in Lebanon right, crimes here were committed by the Christians parties defending against the PLO, the Somalian, Libyan, Sudanese mercenaries and Arab nationalists and "independent leftists".
Do you still own the Arafat Qompass showing Jounieh on the way to Jerusalem?
How about the human ears collected in Damour, Jiyeh, Shouf, South, North, Bekaa..
Do you long for he Qamaraderie you had with members of the Syrian Army killing your fellow Lebanese and fellow Palestinian resistance in numbers only dreamed of by the hated Zionists.
But at least we have the empty rhetoric to keep us going.