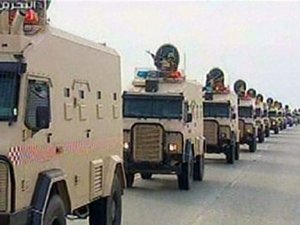 Gulf troops sent to back Bahraini security forces in their crackdown on Shiite-led protests are to be "redeployed" but will not withdraw completely, a Saudi official said on Tuesday.

"It is normal to redeploy the Peninsula Shield force but the danger is not over yet and these forces will not return to their bases or entirely withdraw," the official told Agence France Presse.

The official, speaking on condition of anonymity, refused to give any further details on the movements of the joint force, which is mainly made up of Saudi and Emirati troops.

In mid-March, the troops from Bahrain's Arab neighbors in the Gulf freed up the security forces of the Shiite-majority, Sunni-ruled kingdom to crush pro-reform protests on the streets that had broken out a month earlier.

The redeployment comes ahead of a national dialogue proposed by Bahrain's King Hamad, set to begin on Saturday.

The king ordered the lifting on June 1 of a state of emergency that went into effect on March 15 during the crackdown.

Shiite Iran strongly opposed the military intervention by Bahrain's fellow Sunni monarchies, leading to a further degradation of already tense ties with its neighbors across the Gulf.

America, Israel, and our ally KSA is spreading Democracy in the middle East. Just look how many colonial settlements Israel has built.