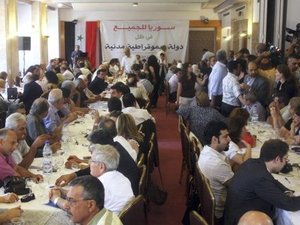 The Syrian regime's authorization of an opposition meeting is a "move in the right direction," but President Bashar al-Assad still needs to go further, the United States said Tuesday.

About 160 dissidents, several of whom have spent years in jail as political prisoners, gathered Monday, prompting the U.S. State Department to say it was "pleased to see the opposition has been allowed some breathing space."

The authorization of the meeting at a Damascus hotel was "a move in the right direction, but much more needs to be done," State Department spokeswoman Victoria Nuland said.

The gathering was seen by Washington as "progress, and something that is new and is important for the democratic process in Syria that we all want to see," she said.

"We want to see an end of violence," Nuland added, insisting that Washington's view of what Assad needs to do has not changed.

U.S. Secretary of State Hillary Clinton has urged a transition to democracy in Syria, telling an Arabic-language newspaper that the regime crackdown would not halt the "irreversible shift" toward change.

What are they going to do? collect all of their names and take care of business afterwards?