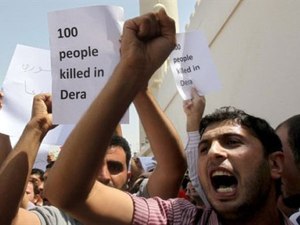 Britain on Tuesday summoned the Syrian ambassador to express concerns about reports that a diplomat at the embassy had been intimidating Syrians in Britain, the foreign ministry said.

"Mr. Turner made clear our strong concerns about the media allegations that a diplomat at the Syrian Embassy has been intimidating Syrians in Britain."

Such intimidation would amount to "a clear breach of acceptable behavior," said the statement.

"If such claims were substantiated, the Foreign Office would respond swiftly and appropriately."

Protesters had received phone calls and visits to their homes and members of their families in Syria had been threatened, the paper said.

A British government source said police have not received any complaints about intimidation by members of the Syrian embassy.

Syria has been in the grip of deadly unrest pitting pro-democracy protesters against security forces since mid-March.

The London-based Syrian Observatory for Human Rights says 1,342 civilians have been killed in the government's crackdown on protesters and that 342 security force personnel have also died.

It is the second time recently that Khiyami has been called in by British authorities.

He was summoned on May 13 to warn of fresh sanctions against the regime if it failed to stop the crackdown on protesters.

In April Britain withdrew his invitation to the royal wedding of Prince William and Catherine.