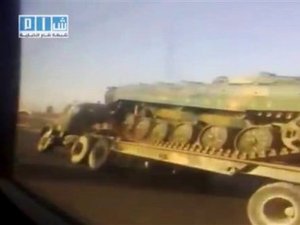 Dozens of tanks and other armored vehicles entered the Syrian village of al-Rami, in the province of Idlib, on Tuesday, Rami Abdul Rahman, president of the Syrian Observatory on Human Rights said.

Separately, other anti-regime militants said Syrian forces had opened fire there and set off flares, which could be seen from the neighboring village of Irm al-Joz.

hmm is the truck supposed to be driving with the front right wheels in the air like that?