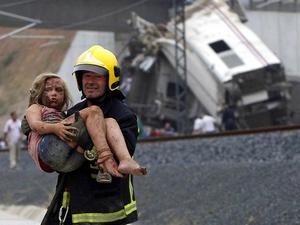 "Everything is under review and subject to proposals for improvement," Public Works Minister Ana Pastor told a parliamentary panel about the July 24 crash.

The eight carriage train was hurtling around a bend at 179 kph (111 mph), more than twice the speed limit, when it flew off the tracks near the northwestern city of Santiago de Compostela, according to its data recording "black boxes".

The driver, 52-year-old Francisco Jose Garzon Amo, was on the telephone to the on-board conductor and stopped speaking just 11 seconds before the train flew off the tracks and ploughed into a concrete siding, coming to rest in a mangled heap.

Garzon has been provisionally charged with 79 counts of reckless homicide. He has been released under court supervision while the investigation into the crash continues.

The government will reevaluate the speed limits and signalling systems in place throughout the railway network and will look at changing the rules on the use of the telephone by train employees as part of the review, the minister said.

It will also study the possibility of installing a satellite system on trains that would reinforce the signalling system, she added.

Spain has invested heavily in rail links over the past decade and it now has the second-largest high-speed train network in the world, spanning 3,100 kilometers. Only China's is larger.

Railway officials say the section of the track where the train crashed was a conventional line that used a less sophisticated safety system that stops trains only if they are travelling at over 200 kph.

The president of state train company Renfe, Julio Gomez-Pomar, told the parliamentary panel on Thursday that the crew had not reported any problems with the train before the crash.

"We are committed to finding out what caused the accident and we will continue to improve the safety of the Spanish rail system," he said.

Gomez-Pomar appeared before the panel along with Gonzalo Ferre, the president of Adif, the company in charge of Spain's rail infrastructure.

"The Spanish rail system is considered one of the best in the world and it's up to us to ensure that it continues to be. Safety is under constant review," Ferre told the panel.

The accident occurred just as Spain is bidding for a contract worth $16.4 billion (12.7 billion euros) for a high-speed rail network in Brazil linking the cities of Rio de Janeiro, Sao Paulo and Campinas which will be awarded in September.

Nine foreigners, including two Americans, were among the 79 people who died in the disaster.

Many aboard the train were Catholic pilgrims heading for Santiago de Compostela's internationally celebrated annual festival honoring St. James, a disciple of Jesus whose bones are said to rest in a crypt beneath the altar of the city's cathedral.

It was Spain's deadliest rail accident since 1944 when hundreds of people were killed in a train collision, also between Madrid and Galicia. In 1972, 77 people died when a train derailed between Cadiz and Seville.