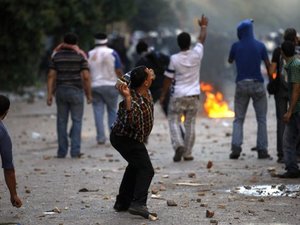 Around 50 people were injured in overnight clashes between protesters and police in central Cairo, officials said, as new scuffles erupted on Wednesday morning.

Anti-riot police were deployed around Tahrir Square -- the epicenter of protests that toppled President Hosni Mubarak in February -- and near the interior ministry building in central Cairo, an Agence France Presse reporter said.

On Wednesday morning, protesters threw stones at security forces who responded with tear gas, but the clashes were on a smaller scale than Tuesday night's confrontations, the correspondent said.

Egypt's ruling military council, which took power when Mubarak was forced from power, warned that an attempt was being made to destabilize the country.

"The regrettable incidents in Tahrir Square... are designed to destabilize the country and pit the revolutionaries against the police," the Supreme Council of the Armed Forces said in a statement.

The clashes "have no reason behind them except to destabilize Egypt's security and stability in accordance with a carefully thought out and organized scheme," SCAF said.

The army urged citizens "not to give in to such schemes but to abort them to protect the country's safety and security."