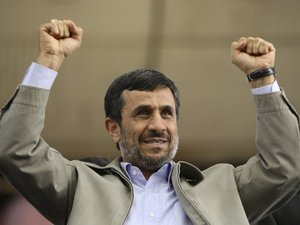 Iranian President Mahmoud Ahmadinejad on Wednesday warned the authorities against making arrests of members in his government whom he vowed to defend, the official IRNA news agency reported.

"I consider defending the cabinet as my duty... the cabinet is a red line and if they want to touch the cabinet, then defending it is my duty," Ahmadinejad was quoted as telling reporters after a cabinet meeting.

"From our point of view these moves and pressures are political... to put pressure on the government," said the president, whose government includes parliament-confirmed ministers and directly appointed vice-presidents.

"Our position is one of silence but in any case if they want to continue it and under different pretexts want to accuse our colleagues in the cabinet, then I have a legal, national and ethical duty to defend my colleagues," he said.

Mohammad Sharif Malekzadeh, a former member of Ahmadinejad's entourage who worked under Mashaie, was reportedly arrested on Thursday last week after being forced out of a diplomatic post by conservative lawmakers.

Two more officials close to Mashaie, who were in charge of two free trade zones across the country, were arrested in the following days, media reported.

The reports of arrests came as ultra-conservatives, who accuse Mashaie of leading "a current of deviation" within the government and exerting too much influence over the president, have stepped up pressure on Ahmadinejad to dismiss his controversial confidant.

The regime's conservatives, the Shiite clergy and the elite Revolutionary Guards also accuse Mashaie of trying to undermine the Islamic republic.

Oh boy ,these Ayatollas will bite their own, watch out Lebanon.